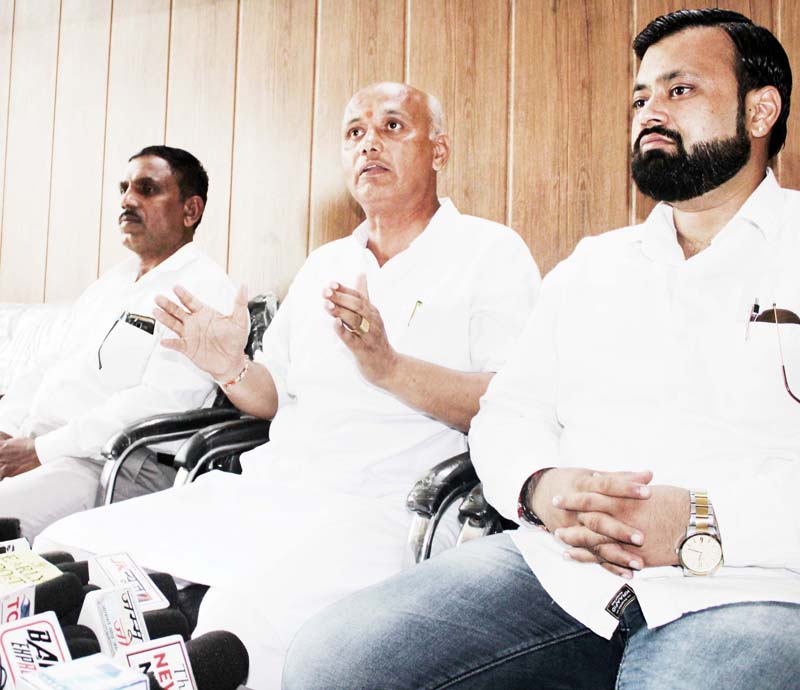 Excelsior Correspondent
JAMMU, Aug 31: In pursuance of resolution moved by Rajinder Sharma, Councillor Ward No. 16, State secretary and State incharge election related matters, BJP on July 17, a House Committee has been constituted for forming of building schemes and plans for Jammu city under Section 260 of J&K Corporation Act 2000, under the overall ambit of JMP 2032.
Speaking to media Sharma highlighted many issues which the public was facing and feeling harassed from years.

Click here to watch video
He said as per Master Plan 2032, only those houses are being granted building permissions who have 10 feet wide lane. But in Old City areas there are lanes which are even less than four feet. Who will buy their houses since their building permission is not granted and moreover they don’t get benefit under Pradhan Mantri Aawas Yojana (PMAY), as they are not granted building permission. Irony of the matter is, that the population for which this scheme has been drafted will not get the benefit.
He said people who got plots at Sainik Colony, Trikuta Nagar, Gandhi Nagar face problems as their wards could not construct house by dividing the plot because only one building permission is granted for said plot. There should be provision for division as per legal heirs (as per number of children), he added.
In the new included areas building permissions were granted by the Block Development Officer (BDO). But for further construction these are to be sought from the JMC which are not given at present. This issue has also to be addressed. These extended wards are 15 in number and new wards are four in number. This area is more than the area of previous corporation.
Permission for one room and bath room should be granted by the officer of the rank of Joint Commissioner (Adm.) as this type of construction would be carried out by the poor. Why they should run from pillar to post for N.O.C, he asked?
Keeping in view, unemployment and other social issues, residents of posh colonies should be allowed to construct one small shop in their residential complex provided that he himself run the shop and boundary wall of the house is not altered.
Small saloons, clinics, tuition centre, should be allowed as for these services people don’t move to long distances.
All Religious Trusts should be given building permission with minimum fees for their regularization.
The Committee comprises of councillors Rajinder Sharma, Pawan Singh, Parmod Kapai, Gourav Chopra and Vijay Chowdhary which will meet on every Sunday from 11 am to 2 pm at Conference Hall of JMC.