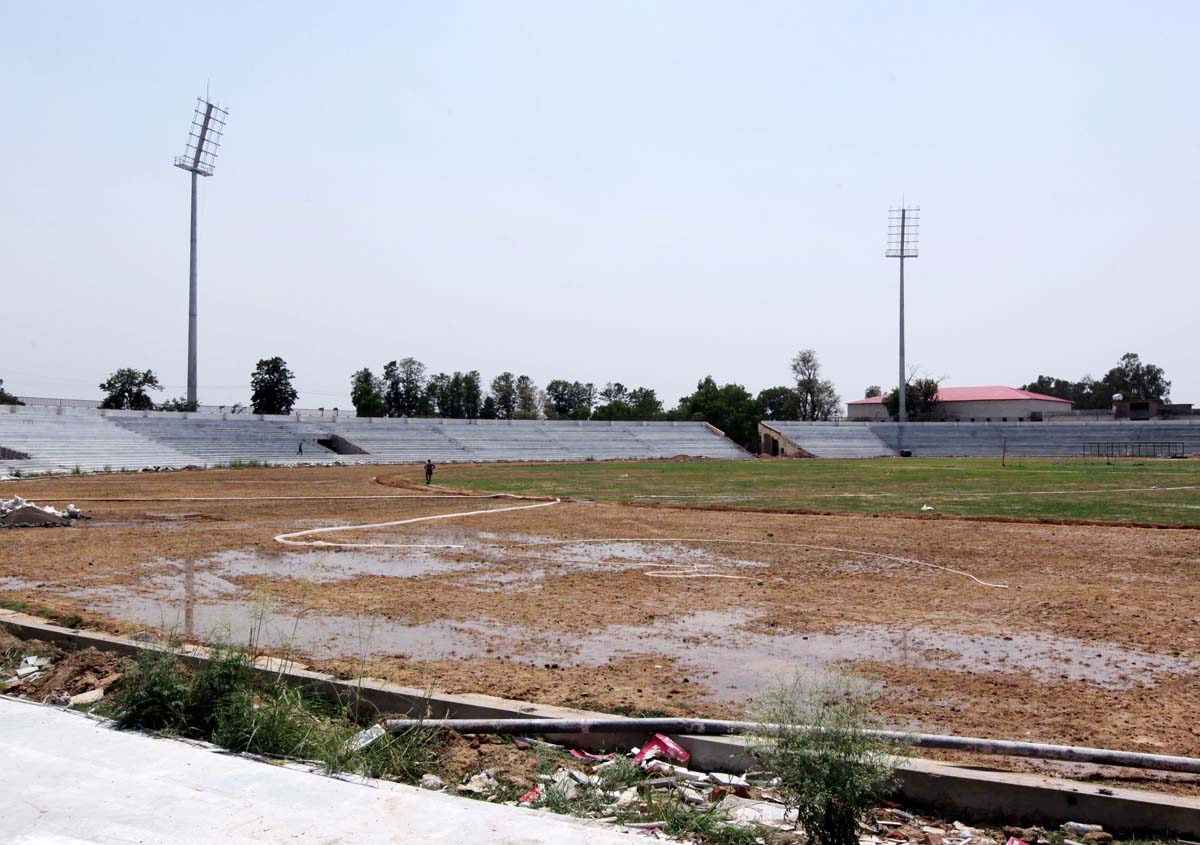 Only one project under PMDP completed till date
Merely 19 medals bagged in 5 yrs under RKGA, Khelo India

Mohinder Verma
JAMMU, July 11: Jammu and Kashmir’s performance in the execution of over Rs 200 crore worth projects particularly those sanctioned under Prime Minister’s Development Package (PMDP) for augmenting sports infrastructure in different parts of the State has remained dismal and no exact time-frame can be specified for the completion of the same.
Official sources told EXCELSIOR that a total of 10 projects—seven under Prime Minister’s Development Package for enhancement of sports facility in Jammu and Kashmir and three under Urban Sports Infrastructure and Khelo India Schemes were sanctioned by the Union Ministry of Youth Affairs and Sports for Jammu and Kashmir several years back.
Out of these 10 projects sanctioned at a cost of over Rs 210 crore, only two projects worth Rs 7.13 crore have been completed by the executing agencies till date and this is the clear testimony of dilly-dallying approach in augmenting sports infrastructure, which otherwise is imperative to provide better facilities to the sportsmen so as to enable them to compete in the national and international events, sources said.
They disclosed that long time back a project worth Rs 6 crore was sanctioned for construction of a multi-purpose Indoor Hall at Leh under Urban Sports Infrastructure Scheme (USIS). However, the project has not been completed till date.
“The slackness in the execution of this project can be gauged from the fact that only 62% work has been completed till date as a result of which only an amount of Rs 3.60 crore has been released by the Union Ministry of Youth Affairs and Sports”, they added.
Similarly, only 20% physical progress has been made in respect of Rs 6.09 crore worth project sanctioned under Khelo India Scheme for construction of synthetic athletic track at Islamic University of Science and Technology (IUST) Awantipora in Pulwama district of Kashmir valley, sources said while quoting the latest information.
About projects under Prime Minister’s Development Package, sources said that only 60% progress has been made on Rs 40.86 crore worth project for renovation and development of Bakshi Stadium Srinagar to International Federation of Association Football Standard.
Though the physical progress in respect of Rs 42.17 crore worth project for renovation and development of Maulana Azad Stadium Jammu to International Cricket Conference (ICC) standard is 70% yet it has already missed the completion deadlines, they further said, adding this project is aimed at providing infrastructure for holding of international cricket matches.
Under PMDP, 22 Indoor Halls in various districts of Jammu and Kashmir were sanctioned at a cost of Rs 88 crore. But till date only one Indoor Hall has been completed and overall physical progress in respect of remaining projects is nearly 60% despite lapse of several years.
However, noticeable progress has been registered in respect of up-gradation of existing stadia at Rajouri and Poonch for which an amount of Rs 4 crore has been sanctioned under PMDP, sources said, adding “the fate of Rs 9.81 crore project aimed at up-gradation of Subhash Stadium at Udhampur is still hanging in balance”.
Under PMDP, an amount of Rs 6 crore was also sanctioned for development of water sports infrastructure at Jammu and Srinagar but till date work has not been started by the concerned authorities despite repeated communiqués from the concerned quarters in the Union Ministry of Youth Affairs and Sports.
Two projects which have been completed till date are lighting system at TRC Ground/Ghani Stadium Srinagar at a cost of Rs 2.63 crore and laying of synthetic football turf at TRC Ground Srinagar.
“It is a matter of concern that despite liberal funding from the Union Government the State Government is dilly-dallying in execution of projects”, sources said, adding “by not gearing up the work on all these projects up to the desired level the concerned authorities of the State are creating impediments in providing benefits of these schemes to the sportspersons”.
Meanwhile, official figures reveal that Jammu and Kashmir bagged only 19 medals in the national sports competitions conducted under RGKA and Khelo India Schemes of the Union Ministry of Youth Affairs and Sports.
No medal was obtained during 2014-15 and 2015-16 under RKGA competitions while as only six bronze medals were secured in the competitions under Khelo India during 2016-17. Under this scheme, 5 and 8 medals respectively were bagged by the J&K sportspersons during 2017-18 and 2018-19 years.
Had sports infrastructure augmentation projects been completed as expeditiously as possible, performance of J&K in national sports competitions under these schemes as well as in other events would have been remarkable, sources said.