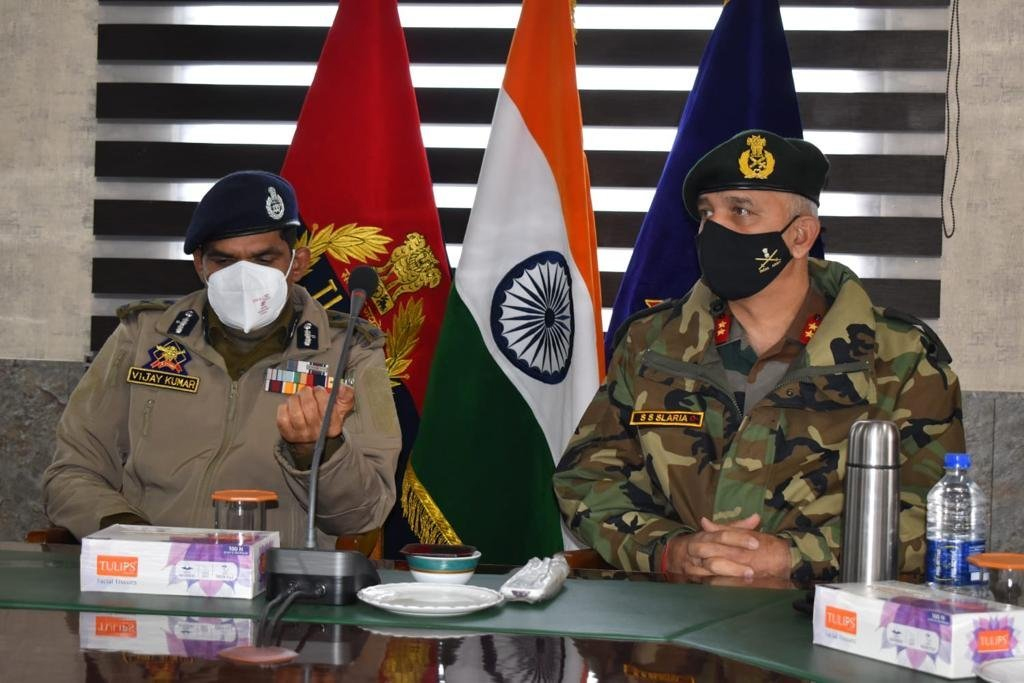 Jammu, Dec 11: Kashmir Police Inspector-General (IG) Vijay Kumar and General Officer Commanding of Army’s Kilo Force, Sanjiv Singh Slaria chaired a joint meeting of security officers in Bandipora, a day after terrorists shot dead two policemen in the district.
Jammu and Kashmir DGP Dilbagh Singh and Kashmir IG Vijay Kumar visited the residence of constable Muhammad Sultan Dar who was shot dead by terrorists yesterday, in the Sopore area of Baramulla.
“Police have received some initial clues and are working on it,” the DGP said.
As per the police, the terrorists had fired upon police party of Police Station Bandipora near Gulshan Chowk area of Bandipora in which two police personnel Selection Grade Constable Mohd Sultan and Constable Fayaz Ahmad received critical gunshot injuries.
“Both the injured were shifted to a nearby hospital for treatment of their injuries, however, both of them succumbed to their injuries and attained martyrdom,” the police said.
The police have registered a case under relevant sections of law.
Reacting to the incident, former chief minister of Jammu and Kashmir and National Conference chief Farooq Abdullah on Saturday slammed the government and said if the police personnel is not safe in the Union Territory, then how is a common man safe.
“It’s sad. The government says everything is hunky-dory. When police personnel aren’t safe, how is a common man?” Farooq Abdullah said while talking to the media.
Asked whether India should initiate talks with Pakistan, he said that the government has to talk to Pakistan, there is no way out.
“You have to talk. There is no way out. China has occupied our territory, they have made their own houses. Does the Government of India allow discussion in the Parliament to understand what the Chinese are doing?” he said.
Earlier on Friday, a wreath-laying ceremony was held in Bandipora evening for two police personnel Selection Grade Constable Mohd Sultan and Constable Fayaz Ahmad who were killed in a terrorist attack in Bandipora. (Agencies)