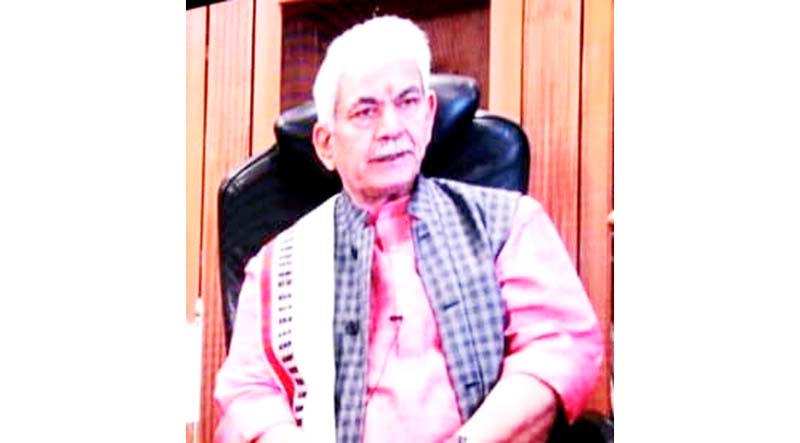 SRINAGAR, Apr 12: Jammu and Kashmir will soon roll out a new policy to attract filmmakers and bring back the golden era of filmmaking in the Union Territory, Lieutenant Governor Manoj Sinha said here today.
Virtually addressing a two-day conference on ‘tapping the tourism potential of Kashmir – another day in paradise’ – organised by the Union Ministry of Tourism at SKICC on the banks of the Dal Lake here, Sinha said various tourist spots of Kashmir were favourite destinations of the Mumbai-based film industry in the 1960s and 1970s.

Click here to watch video
“In the coming week or 10 days, Jammu and Kashmir’s UT administration will come up with a new film policy to bring back Kashmir’s golden era on the silver screen,” Sinha said, adding, issues being discussed in the conference will act as a roadmap to achieve that.
The LG said there are hundreds of unexplored destinations in Jammu and Kashmir about which the people do not know, but his administration is taking steps to bring them on the tourist map.
“Work has been started to develop infrastructure, with public and private investment, at such places,” he said.
Sinha said despite COVID-19 pandemic, Kashmir witnessed the highest number of domestic tourist arrivals in the country since December last year.
“Tourism sector is the most affected by the pandemic. We have taken several steps for the revival of tourism without making any compromise on the health of tourists and the people of J&K,” he said.
He said the number of arrivals has helped in reviving the sector and decreasing the unemployment rate in the UT.
“Thousands of people associated with the industry have got employment opportunities. The unemployment rate in J&K in the month of September last year was 16.1 per cent, but it has dropped to nine per cent as per the latest data in the month of March this year,” he said.
“The unemployment rate at many tourist destinations like Delhi, Himachal Pradesh and Goa is much more than J&K. I believe that the tourism sector is the biggest contributor to this achievement,” he said.
The LG expressed hope that in coming days, tourist arrivals to the UT would increase further which would in turn generate more employment opportunities and help the economy to grow.
“J&K has an immense potential for increasing tourism and while some steps have been taken to tap that potential, I feel there is much more to do and we are on it,” he said.
Union Minister of State for Tourism and Culture, Prahlad Singh Patel, in his video address, said the two-day event by the ministry is an effort to promote tourism in the UT.
“We have seen a lot of difference between January 2020 and January 2021. The number of tourists has increased five times. This event has been organised to further improve this environment,” he said.
Patel said Kashmir has witnessed an increase in the number of tourist arrivals after the revocation of Article 370 in August 2019.
“The way tourist arrivals started in Srinagar, there is a need to improve infrastructure at the unexplored places and the places with historical importance. So, for that it is important that we meet, discuss and give suggestions and I thank all those who are present in this event,” the Union Minister said.
Advisor to the LG, Baseer Khan said Kashmir will witness lot of tourist arrivals in the summer months ahead.
Khan said the administration has finalised a list of new destinations which would be opened for tourism and sought the help of private players.
“I request private players to come forward and do the hand holding in increasing the right infrastructure so that many new destinations are made available,” he said, adding, the primary focus is to ensure basic infrastructure at new tourist destinations so that visitors enjoy their stay.
In his address, Union MoS, Prahlad Singh Patel said that this conference has been organised to improve the flow of tourists into Jammu and Kashmir, wherein all the stakeholders have been invited to meet, discuss and give suggestions to create better tourism infrastructure in entire J&K.
Speaking on the occasion, Advisor to Lieutenant Governor, Baseer Khan said that after COVID pandemic, “we did lot of activities to restore tourism activities here. Several webinars and various strategies were adopted in this direction”.
Union Secretary Tourism, Arvind Singh said “we have been striving hard since the pandemic to help revive tourism in J&K.” The efforts in revival started in winters and the process will continue in summers especially the for the domestic tourist and it should set an example as and when we open up the visa for international tourists.