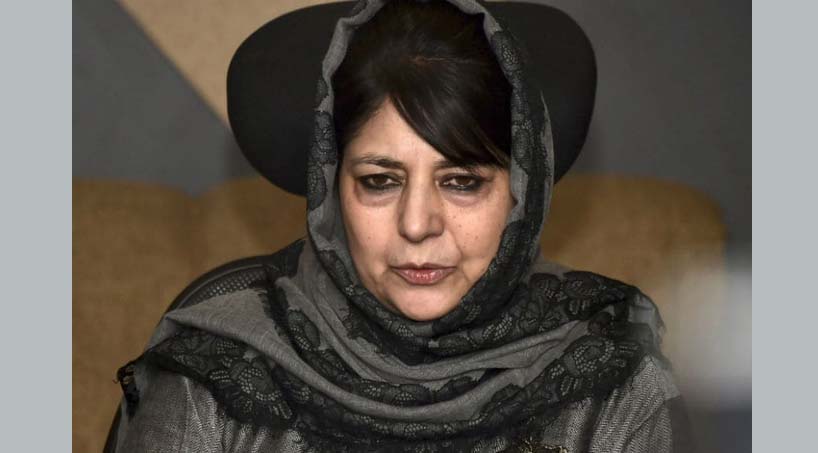 SRINAGAR, Apr 12: Former Chief Minister and People’s Democratic Party (PDP) president, Mehbooba Mufti, today appealed to the youth of Kashmir to stay away from gun culture and fight for their rights in democratic way.

Click here to watch video
Speaking to reporters on the sidelines of the membership drive here, Mehbooba said that the Government of India wants youngsters in Kashmir to pick up guns so that they can kill them. She requested them to give up gun culture and fight democratically.
“They want more and more youngsters of Kashmir to pick up guns so that they can kill them; I request my youngsters not to pick guns, nobody is going to understand the language of the gun, the world is against violence, and there is a need of employing democratic means to put forth your issues; if they won’t listen to you today, they will have to one day. Any movement which has an element of violence is bound to fail. One fine day, India and Pakistan have to sit and resolve the issue”, she said.
Earlier, addressing the workers, Mehbooba said that the accession between J&K and Union of India has been trashed in 2019 by the BJP led regime at the Centre. She said it is not acceptable and the rights and identity snatched from the people here must be restored.
“Those who have turned Jammu and Kashmir into a jail must bear in mind that we don’t accept the decision taken by the Government. We will fight for our rights till our last breath. Even if a journalist speaks anything, he is being called and subsequently booked under UAPA,” she said.
She said that she fails to understand why BJP is getting angry over demand for restoration of special status to Jammu and Kashmir and identity of the people here.
“It is not Pakistan but India who had given us the special status. I don’t understand why BJP is getting angry why I am asking my country to restore the identity and special status of Jammu and Kashmir. The Government has put an end to the agreement between J&K and Union of India, but still it is the people of J&K who are holding the hand of India. And when we raise any objection, we are being asked to stay calm,” she said, adding that the situation in Jammu and Kashmir and Ladakh is very critical.
The PDP president hoped that PM Narendra Modi will attend SAARC summit in Pakistan as dialogue is the only way out. “As the SAARC summit is set to be held in Pakistan, we hope our Prime Minister will go there as there is no other way besides dialogue to resolve the issues”, she said.
She added that Government does not want anyone to speak after August 2019 and PDP is the only voice that speaks and they want to silence it.
“Whatever they have been doing since August 5 2019, they do not want anyone to speak about it and with PDP being the only party in J&K that speaks vehemently, they are trying their best to silence our voices.  PDP is the only voice that speaks which they want to silence”, she said.
“I might not be here tomorrow given the fact that they are after me. They called me to the ED, and could not find anything, now they summoned my mother who has got nothing to do with anything, she is an ordinary woman, and maybe they can summon my daughters tomorrow.  They stripped the people of Kashmir and they are asking us why do we speak?”, she said.
Mehbooba said that her party’s message is same that was its founder’s. “Our message is the same as what Mufti Sayeed used to say. He always pitched for opening up roads so that people could travel to Pakistan, China, Uzbekistan; so that people are set free of the cage they have been living in for years”, she said.
She hoped that Kashmir may act as a bridge between India and Pakistan. “There is no other solution to the issue of Kashmir as neither Pakistan is going to free their Kashmir, nor is India going to do so. Therefore, opening up of roads is the only solution. We are hopeful that Kashmir acts as a bridge between India and Pakistan”, he said.
“If I am anti-national for advocating talks between India and Pakistan, then what did they do to implement the ceasefire pact, didn’t they talk? If PM Modi can offer the militants of Assam to shun the violence and return to the mainstream, why no such talk in Kashmir? Why are there double standards?”, she asked.
She said that PAGD stands for the restoration of 370 and it is intact, as people want it to speak for them. “There was no meeting of the PAGD as Dr Farooq was not keeping well”, she said.
The PDP president said that the Government of India is resorting to pressure tactics and is doing everything to muzzle and suppress the voices of people. “I want to tell them not to go to the extent that there remains no point of return for them. They have turned J&K into jail and they should keep in mind that we are going to fight for our rights till the end”, she added.
About the delimitation process in J&K, Mehbooba said that the Central Government will always try to keep the power of J&K into their hands so that they can take any decision vis-à-vis UT directly from Delhi. She said the Central Government wants to execute their decisions without the interference of local Government here, and thus don’t want elections to be conducted soon.