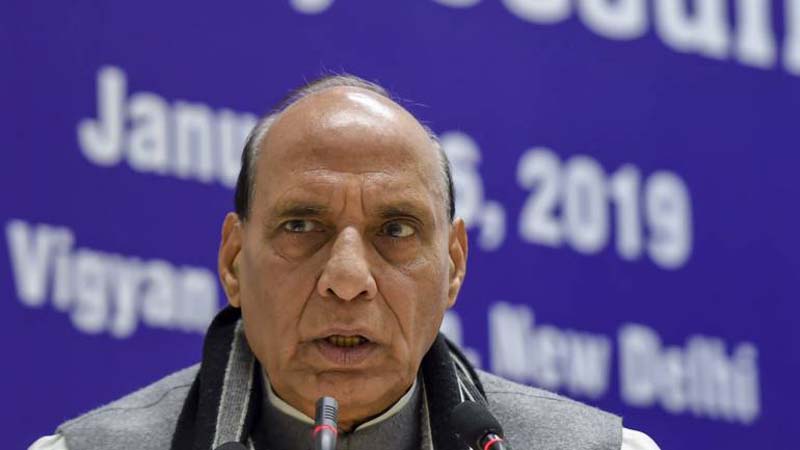 JAMMU: Union Defence Minister Rajnath Singh on Saturday said that the state of Jammu and Kashmir will soon be ‘terrorism free’.
“Jammu and Kashmir will be ‘terrorism free’ soon and not only India but international community has also joined hands to collectively fight against terrorism,” Mr Singh told mediapersons at Kathua after dedicating Ujh Bridge to the nation.
Union MoS Dr Jitendra Singh also accompanied him.
Defence Minister Rajnath Singh said that terrorism in present scenario is a global concern and besides, Jammu and Kashmir, all those nations, suffered in its hands, are ready to fight against terrorism.
He however, also lauded the army for their valour and saluted them for their sacrifice in 1999 Kargil war.
Earlier addressing a Public gathering, Mr Singh hit out at Pakistan proxies and said, “Children are forced to raise Azadi slogans and they are being made canon and fodder.”
Union Minister also slammed the separatists saying that they are using our children to pelt stones, adding, “The children of separatists are studying in foreign countries but they are spoiling our future generations by indulging them into stone pelting.”
“What kind of Azadi you want,” he questioned and said, “Is it the similar one that is in Pakistan?”
“I want J&K to be paradise on Earth again and it should most favoured tourist destination across the world,” he desired.
“Kashmir resolution is also on cards and if no talks will take place, we know how to resolve the issue and no one on earth can stop us from doing so,” Mr Singh said.
(agencies)