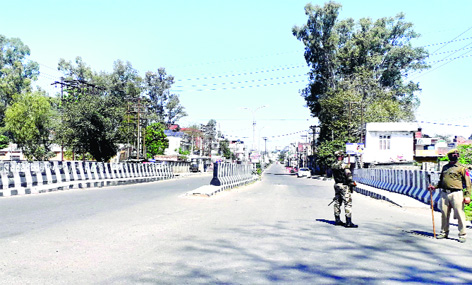 Kalyani Shankar
India shut the door on the deadly Coronavirus on Sunday by observing an unprecedented voluntary Janata curfew responding to Prime Minister Narendra Modi’s appeal to stay indoors. In a cautious but effective public appeal Modi requested the people of the country to stay indoors from 7 AM to 9 PM on Sunday. It was in what could be the biggest social-distancing exercise in the world against the novel coronavirus outbreak. Hinting that the country should be prepared for a long haul, Mod tweeted on Sunday night “Today’s #JantaCurfew may get over at 9pm, but that doesn’t mean we should start celebrating. Do not consider it a success. Today the countrymen have declared we are capable, if we decide we can beat biggest challenge together. “India stands at the tipping point having reached the stage 3 of the pandemic as confirmed by Delhi Chief Minister Arvind Kejriwal on March 22. From here it could take a flattening curve like Korea or upward curve like Europe. Janata curfew is Modi’s idea of mobilizing public support to fight Coronavirus
It is nobody’s case that this one day self- isolation will drive away the deadly disease but it is at least one step closer to bring awareness in the country about the danger of the pandemic and remind the public of his or her duty towards the country. As expected the Janata curfew was immediately followed by lock down in most states, and these are some of the difficulties the public has to bear with at a time of pandemic.
All epidemics evoke fear and panic since they result in fatalities. Coronavirus is no exception. However, in its management, four elements are important – Science, the public health system, and political support from the Government and the public support. While Modi’s appeal shows complete political support, much more needs to be done on the public health service. Janata Curfew should be seen in the larger context, as without the public involvement a pandemic of this kind cannot be contained. Scientific research is going on to find a vaccine.
The fact that Prime Minister’s appeal has received overwhelming support across the spectrum shows that people are behind the Government. Several Chief Ministers, Members of Parliament, political parties, sports personalities, film stars and celebrities came on board to make the Janata curfew a success. The support for PM Modi also came from unexpected quarters including the Congress and other opposition parties.
Even gods seem to be not averse to the measures, as the temple authorities across the country had come on board and shut down the temples in an unprecedented manner. Priests in a temple in Varanasi decided to put masks on the idols and posters have been put up appealing to devotees to not touch the idols.
Now that the Janata curfew has received an overwhelming response what follows? The challenge before the Modi Government is formidable. Many countries across the world have announced support for their economies. The UK proposes to spend 330 million pounds and the United States close to a trillion dollars. The European countries like France, Spain and Italy are getting ready to spend billions of euros. The Modi Government too will have to mobilise all the resources at its disposal to keep the country pandemic-free and also ensure that the livelihood of people is safeguarded. The Centre and the states will have to focus on how to deal with lakhs of people who will be displaced due to the lockdown. This is particularly so in the case of construction workers, cab and auto rickshaw drivers, daily wage earners, domestic help, small business enterprises and so on. The Government has to think of a huge economic package to tide over the present crisis. The more drastic the precautionary health measures, the greater will be the fallout on the economy. Modi has announced an economic task force under the Finance minister but they are yet to come up with schemes. However, some states like U.P, Telangana and Delhi have come out with relief packages.
The Janata curfew makes it clear that pursuing one’s own self-interest is not enough, as each citizen also has to think of the public interest. While every one of us has the legal right to buy as much hand sanitizer and face tissues as we can find, what about the welfare of the society in which we live? India believes in Vasudaiva Kutumbakam. Experts say that quarantine is one of the effective ways of containing an epidemic. Therefore, it is imperative that more than the steps taken by the Government it is necessary to impose self-restrictions at an early stage rather than wait for the pandemic to strike. As Dr Paul, head of the medical task force at the Centre, commented in a TV show, coronavirus is a once in a century epidemic and has to be fought as such. Indeed desperate situations need desperate measures. (IPA)