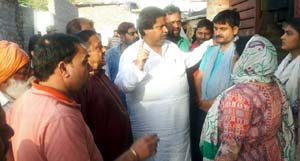 JAMMU, Apr 29: Congress today alleged that the PDP-BJP Government in the State has become a “non-performing liability”, and urged the administration to come out of deep slumber to infuse responsiveness and accountability in order to mitigate the sufferings of the people.
“The PDP-BJP Government has collapsed. It is non-performing liability in Jammu and Kashmir,” former Minister and senior Congress leader, Raman Bhalla observed this while interacting with prominent persons of Sunjwan in Gandhi Nagar constituency.
Expressing serious concern over scarcity of essential commodities, poor power and water supply, Bhalla said, “the administration must come out of deep slumber and infuse responsiveness and an element of accountability in its machinery in order to mitigate the sufferings of people.”He alleged that the PDP-BJP Government led by Mehbooba Mufti had failed on all fronts.”The people of Jammu are experiencing difficulties due to the shortage of electricity, erratic water supply and scarcity of ration,” he added.
“The people have to struggle hard to get their basic amenities because the PDP-BJP dispensation is not paying due attention towards essential services such as road connectivity, providing ration to the people, health care, and water and electricity supplies,” he added.
Bhalla said that Jammu region has immensely suffered due to turmoil in Kashmir. It is not only deprived of normal governance and routine administrative operations but also of the essence of democracy. Presently also, the highly subjugated Jammu region is suffering politically and economically due to ongoing unrest in Kashmir. There is growing unrest in Jammu region against the perpetual bias and discrimination doled out to this region in the matter of allocation of funds, employment, general development, tourism promotion, power sector, connectivity, heath besides other sectors.
He said there is strong demand for equitable treatment to Jammu and balanced development of all regions. The issue of unemployment and under-employment has assumed alarming proportions in the State particularly Jammu region. The issue needs to be addressed on priority in view of summering discontent amongst the educated youth, he added.
He said over three years have passed but not a single promise made to the people by the BJP in Jammu and the PDP in Kashmir has been fulfilled. He claimed that the two parties were divided on the sensitive issues facing the State. The State Government has failed to live up to the expectations of the people and address the problems of border residents, farmers, youth employees, casual labourers and traders. “Every section of the society is suffering as their grievances are not addressed, he added.