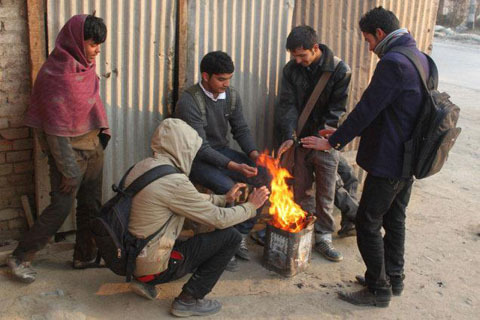 Govind Sharma
JAMMU, Dec 25: Jammu recorded season’s lowest temperature this morning at 4.1 degree Celsius while Srinagar, the summer capital of the State, which recorded the coldest night in 11 years on Monday at minus 6.8 degrees Celsius, experienced some respite as mercury settled at minus 5.5 degrees Celsius last night. However, flight operations at Jammu and Srinagar Airports remained disrupted today due to low visibility conditions in New Delhi.
“Residents of Jammu woke up to a chilly Tuesday morning as the mercury further plunged to 4.1 degrees Celsius – the season’s lowest so far,” said a weatherman, adding, the night temperature is on a decline across the Jammu region with the minimum temperature in Banihal and Batote, along the Jammu-Srinagar National Highway, and Bhaderwah in Doda district, slipping to sub-zero levels.