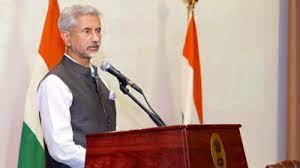 NEW YORK, Sept 22: External Affairs Minister S Jaishankar shared his concerns about the security and welfare of the Indian community in the UK with his British counterpart James Cleverly and welcomed his assurances on the same.
“A warm conversation with UK Foreign Secretary @JamesCleverly. Discussed taking forward Roadmap 2030. Appreciate his commitment to deepening our partnership,” Jaishankar tweeted Wednesday.
He said his conversation also covered global issues, including Indo-Pacific, Ukraine and UNSC matters.
“Shared my concern about the security and welfare of the Indian community in the UK. Welcomed his assurances in that regard,” Jaishankar said.
In his meeting with Bolivia Foreign Minister Rogelio Mayta, Jaishankar said he spoke about “our development partnership and expanding our economic engagement. Exchanged views on global developments.”
After his meeting with Minister of Foreign Affairs of Norway Anniken Huitfeldt, Jaishankar said he appreciated “our ongoing cooperation in the UN Security Council. Discussed our Nordic partnership, Afghanistan, Ukraine and climate action.”
He also met Foreign Minister of Estonia Urmas Reinsalu and “discussed the deepening of bilateral cooperation following the opening of our Embassy. Also exchanged views on developments pertaining to Ukraine.”
Jaishankar hosted the 10th India-Brazil-South Africa (IBSA) Trilateral Ministerial Commission Meeting and reviewed the IBSA process and recognised its activities.
“Appreciated its promotion of South-South cooperation, including on global and multilateral issues. Reiterated commitment to reformed multilateralism,” he said. Brazil’s Foreign Minister Carlos Franca and Minister of Health of South Africa Joe Phaahla attended the meeting. (PTI)