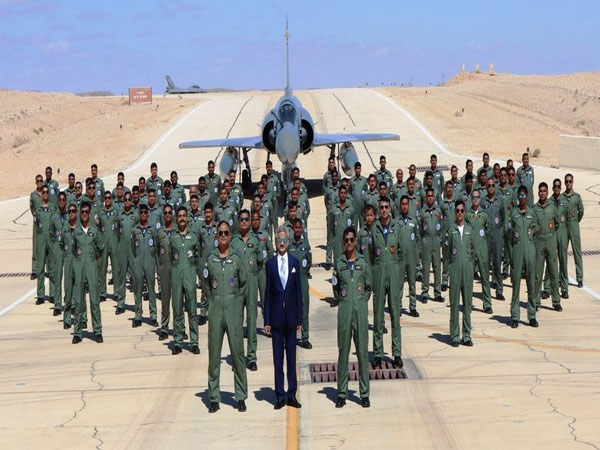 Tel Aviv [Israel], Oct 19: External Affairs Minister S Jaishankar on Tuesday visited the Ovda airbase in southern Israel and interacted with Indian Air Force members who are participating in the Blue Flag 2021 international exercise.
The minister — who is on a five-day visit to Israel — expressed his happiness to witness the “mutual respect and chemistry” between the Indian and Israeli forces here.
He also emphasised that defence and security are the key pillars of India-Israel relations.
“Visited the Ovda airbase to meet the @IAF_MCC participants at Ex Blue Flag – No 1 Sqn “TIGERS”. Delighted to see the mutual respect and chemistry between Indian and Israeli Air Force professionals. Defence and security are key pillars of our relationship,” Jaishankar said in a tweet on Tuesday.
Indian Air Force’s Mirage 2000 aircraft squadron has taken part in the Blue Flag 2021 international exercise which began here on Sunday.
Seven countries including Israel, Germany, Italy, Britain, France, India, Greece and the US are the participants in the exercise. The Indian Mirages and the French Rafale are participating in the exercise for the first time.
Jaishankar arrived in Israel on Saturday. Earlier, the Ministry of External Affairs on Saturday had said that New Delhi and Israel elevated bilateral relations to a Strategic Partnership during the historic visit of Prime Minister Narendra Modi to Israel in July 2017.
Since then, the relationship between the two countries has focused on expanding knowledge-based partnership, which includes collaboration in innovation and research, including boosting the ‘Make in India’ initiative, the MEA noted. (Agencies)