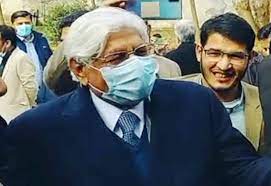 Islamabad, Dec 28: The Islamabad High Court (IHC) on Tuesday set January 7 as the date for framing charges against former Gilgit-Baltistan Chief Justice Rana Shamim in a contempt of court case, in relation to the publication of an affidavit levelling allegations against former chief justice of Pakistan Saqib Nisar.
According to Dawn report, Justice Minallah also directed Shamim to submit copies of the affidavit to Attorney General Khalid Jawed Khan.
Earlier, the former chief judge of apex court of Gilgit-Baltistan said he was a witness to former chief justice of Pakistan Saqib Nisar’s order to a high court judge to not release Nawaz Sharif and Maryam Nawaz on bail at any cost before 2018 general elections.
According to the affidavit of Shamim, Mian Muhammad Nawaz Sharif and Maryam Nawaz Sharif must remain in jail until the general elections are over. On assurances from the other side, he (Saqib Nisar) became calm and happily demanded another cup of tea.”
The document stated that the ex-GB chief judge’s statement was given under oath before the Oath Commissioner on November 10.
Both Nawaz Sharif and Maryam Nawaz were convicted by an accountability court in a corruption case before the July 25, 2018 general elections.
According to The News International, their lawyers had moved court for suspension of the conviction but the case after initial hearings was postponed till last week of July.
However, former Chief Justice Saqib Nisar denied he had ever issued directions to any of his subordinate judges in any judicial order, including Nawaz Sharif, Shehbaz Sharif, Maryam Nawaz.