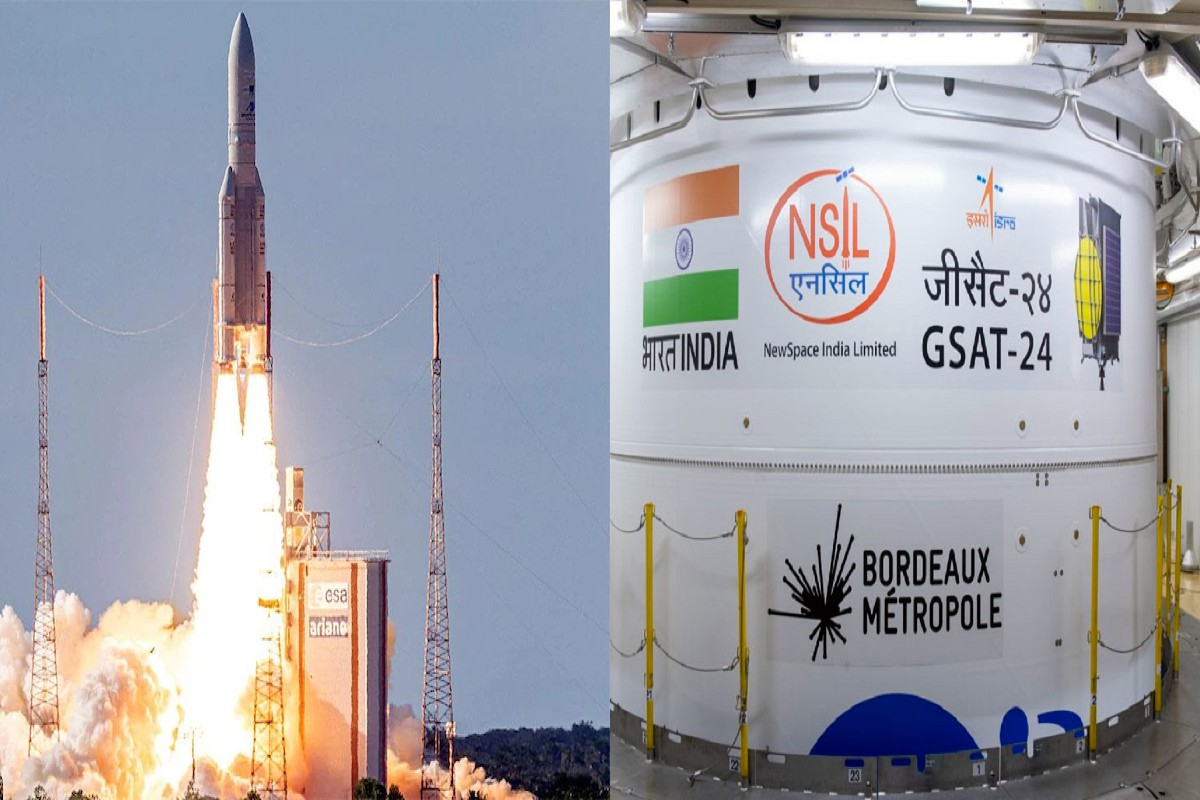 CHENNAI, June 23: GSAT-24, the 4,180 kg India’s 24-Ku band communication satellite, was successfuly launched by European Spoace Agency’s (ESA) Arian Rocket from Kourou in French Guiana early Thursday morning.
The satellite, with pan India coverage for meeting DTH application needs, was injected into the desired orbit along with Malaysian communication satellite MEASAT-3D by Ariane-V VA257 flight.
Arianspace said “on Wednesday, June 22, 2022 at 06:50 pm local time (0320 hrs June 23, Indian Time today), the Ariane 5 launcher lifted off from the Guiana Space Center, Europe’s Spaceport in Kourou, French Guiana (South America), successfully orbiting two geostationary telecommunication satellites, MEASAT-3d and GSAT-24.
With this Ariane 5 mission, Arianespace is honored to support the ambitions of two key actors in the Asia-Pacific region: MEASAT, the leading Malaysian satellite operator and NewSpace India Limited (NSIL), a Government of India company within the Department of Space (DOS) acting in concert with the Indian Space Agency ISRO. With the orbiting of both MEASAT-3d, the fourth satellite that we’ve launched for the benefit of Malaysia, and GSAT-24, the 25th Indian satellite we’ve delivered for them, we are affirming our long term partnership with these two great actors, declared St phane Isral, CEO of Arianespace.
The launcher carried a total payload of approximately 10,863 kg.
NewSpace India Limited (NSIL) under the Department of Space (DoS) undertook the GSAT-24 satellite mission as its 1st Demand Driven mission post space reforms.
NSIL has leased the entire satellite capacity to M/s Tata Play, a leader in DTH services. Thanks to this satellite, Tata Play will be able to offer better and reliable services to its customers.
GSAT-24 is a Ku-band 4-tonne class communications satellite built for NSIL by ISRO. This satellite will provide high-quality television, telecommunications and broadcasting services and will meet the DTH needs of Indian customers.
Configured on ISRO’s proven I-3k Bus with a mission life of 15 years, GSAT-24 is the 25th indian satellite to be launched by Arianespace and the 11th of the GSAT series.
Arianspace said carrying out its first mission of the year, and the 113th overall, Ariane 5 once again demonstrates its exceptional reliability.
Mission VA257 will improve broadband coverage in the Asia-Pacific region and represents another commercial success for Ariane 5 in the Asia-Pacific market.
After the successful launch of the James Webb Space Telescope, this new achievement helps Ariane 5 write a new chapter in space history, said Andr Hubert Roussel, CEO of ArianeGroup.
Ariane 5 demonstrates its reliability once again, justifying the trust of Arianespace’s customers worldwide. Its successes are tied to Ariane 6, which benefits from the same reliability along with increased competitiveness and versatility, he said.
The Ariane 5 heavy-lift launcher is an ESA program carried out in cooperation between public institutions and industry across 12 European partner states.
ArianeGroup is the lead contractor for the development and production of Ariane 5, and is responsible for campaign operations and preparation of the launch vehicle up to lift-off.
ArianGroup hands over a ready to fly rocket to its subsidiary Arianespace, which sells the Ariane 5 and operates it from the Guiana Space Center in French Guiana.
During launch campaigns, Arianespace works closely with CNES, who is the design authority for the Ariane 5 and controls the satellite preparation facilities at the CSG.
After this launch, four Ariane 5 vehicles remain before the Ariane 6 takes up the baton, supporting Europe’s institutional missions, while meeting the growing needs of the commercial market. (AGENCIES)