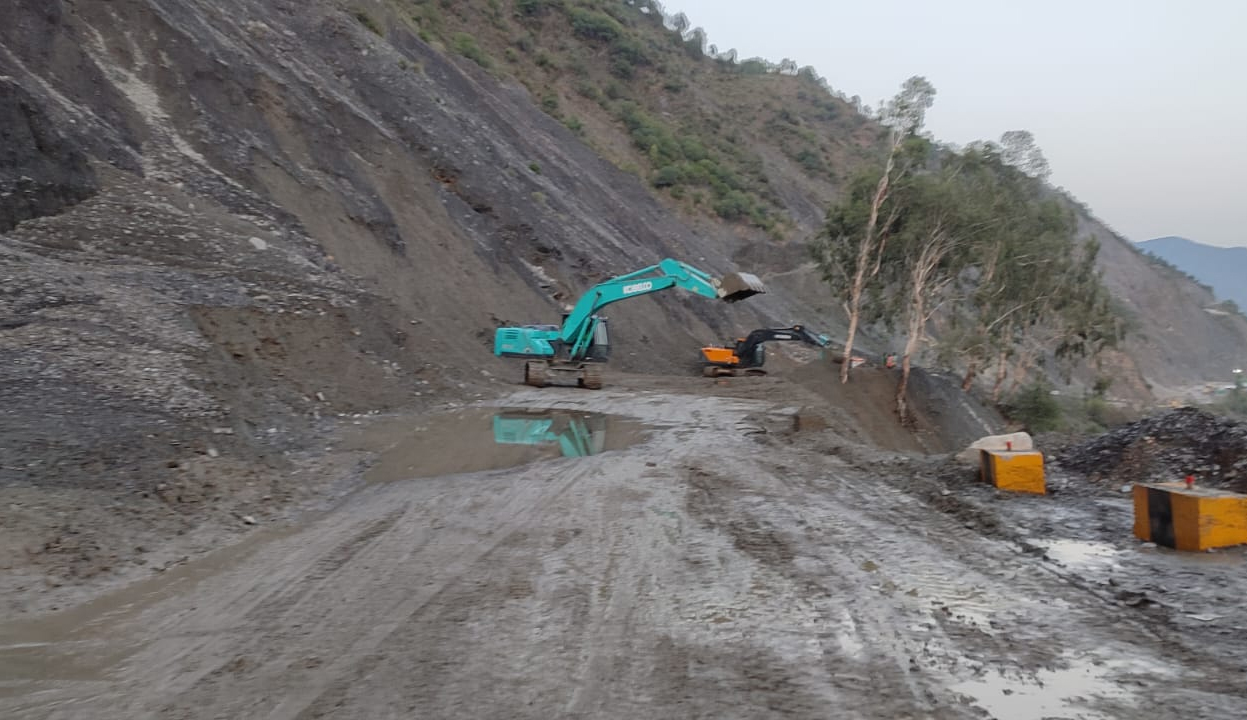 RAMBAN/JAMMU, June 23: The Jammu-Srinagar national highway remained closed for the third consecutive day on Thursday even as over 600 Kashmir-bound stranded vehicles were cleared after road clearance operations and improvement of weather conditions.
Efforts are on to clear the remaining 1,400 stranded vehicles on the highway that has been shut since Tuesday evening due to landslides triggered by heavy rains.
Deputy Commissioner, Ramban, Mussarat Islam, who is personally monitoring the road clearance operations, said 25 out of 30 landslides and mudslides on the highway have been cleared.
The highway was blocked due to landslides, mudslides and shooting stones at 33 places in Ramban and Udhampur districts apart from washing of a 150-feet long road stretch and under construction bridge on the highway due to flash floods triggered by heavy rains.
“The restoration work in Banihal Ramban sector at over five to six closed locations is under way.The restoration in this sector expected till late evening”, traffic officials said.
The Mughal road, another link connecting the twin Poonch-Rajouri districts of Jammu region with South Kashmir’s Shopian district, was also cleared for traffic after remaining closed for two days owing to landslides triggered by heavy rains.
“Efforts have been stepped up to ensure early restoration of traffic on the Jammu-Srinagar national highway. The road was cleared of landslides, mudslides and other obstacles caused by shooting of stones at over two dozen places since its closure on Tuesday evening,” Senior Superintendent of Police, national highway, Shabir Ahmad Malik told PTI.
He said over 600 stranded trucks and passenger vehicles, which were stranded between Panthiyal and Banihal, were cleared and reached their destinations in Kashmir, while efforts are on to clear the remaining 1,400 vehicles.
“The road clearance operation is going on a war footing at remaining six locations including Dwal bridge near Samroli (Udhampur district) and Kela Morh, Sita Ram Passi Maroog and Battery Cheshma (in Ramban),” Malik said.
The officer said road clearance agencies have pressed their men and machines and the only all-weather road is likely to be restored for traffic by this evening or early tomorrow.
“The stranded vehicles will be given priority once the road is made through,” the officer said.
As the highway continues to be closed for traffic, stranded passengers have been provided with food and medical facilities, they said.
It is still raining in Ramsoo-Ramban sector and a fresh landslide has struck the highway near Rompadi in Ramban, officials added. (AGENCIES)