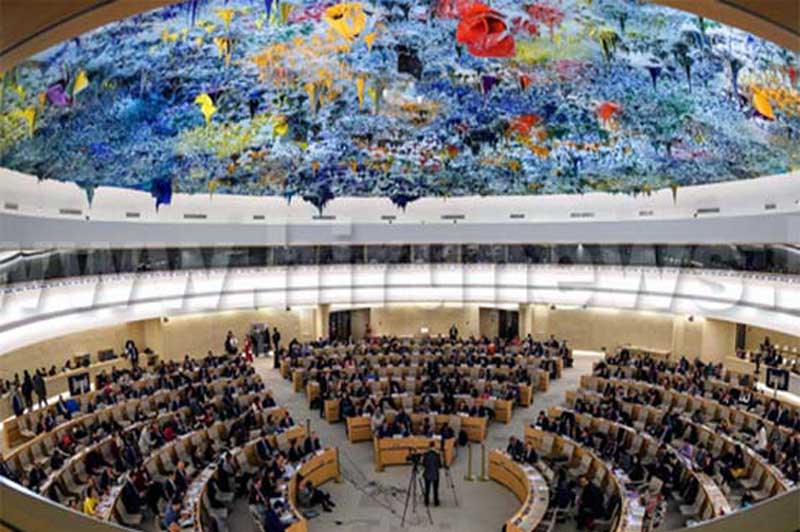 Excelsior Special Correspondent
GENEVA, Sept 19: Frustrated Pakistan has galvanized its NGOs and sympathizers in Geneva into unleashing anti-India tirade while the 42nd Session of the UN Human Rights Council is in progress. The disgruntled emigrants from PoK living in various European countries and in UK either as expats or asylum seekers and calling themselves as “nationalists” are on the horns of dilemma as their dream of independent State of Jammu and Kashmir seems to have been shattered by the revoking of Articles 370/35-A and conversion of the State into two Union Territories.
These so-called nationalists met frequently at the UN Headquarters here to charter their policy but there is hardly any consensus. Each group has its vested interests. The one opinion that they have drawn is the senselessness of their dream of ‘azaadi’.
India-based NGOs and many other sympathizing NGOs at the UNHRC have been strongly repudiating the Pakistani propaganda on Kashmir situation through interventions, side events and group contacts. Among others, a powerful intervention was made by the President of Asian-Eurasian Human Rights Forum Dr K N Pandita in which he underlined the one-sided observations of the UN Human Rights High Commissioner’s opening statement on conflict situations.
He asked whether the HR Council would give priority to saving the human lives or internet services. Dr Pandita asked that while the High Commissioner was concerned about the difficulties of massacres Kashmiris, she was also suggested to take cognizance of pogroms (massacres), ethnic cleansing and three decades old suffering of seven hundred thousand invisible indigenous Pandit minority, hounded out of their homes by armed radicals in 1990. Invoking the UN Declaration on the Rights of the Indigenous Peoples, Dr Pandita demanded their rights to ” recognition, reparations and reconciliation.”
In a couple of side events, several NGOs strongly supported India’s sovereign right of free flow of Constitution and the jurisprudence of Constitutional law vis a vis human rights regulations.
Incidentally the Baloch, Pushtun and Kashmiris (PoK) staged strong protest rallies at the Broken Leg site in which a large number of speakers exposed Islamabad Government’s oppressive and repressive policy towards their people.
In a significant side briefing organized by the Association Pan-African on the theme of Dialogue on Constitutional Reforms and Human Rights”, David Vance and Ms Katie Hopkins, two outstanding British media persons chose to speak on the case study of evocation of Article 370/35-A and asserted that owing to Pakistani propaganda multiple positive results including curtailment of various discriminations have not yet come to light. In a video message Bob Blackman, the British MP highlighted multiple positive aspects of revocation of 370 and 35-A. The panelists opined that the era of proxy war, jihad and cross border terrorism sponsored by Pakistan was coming to a close. They were of the opinion that UK and the EU also were feeling the heat of Islamic extremism.