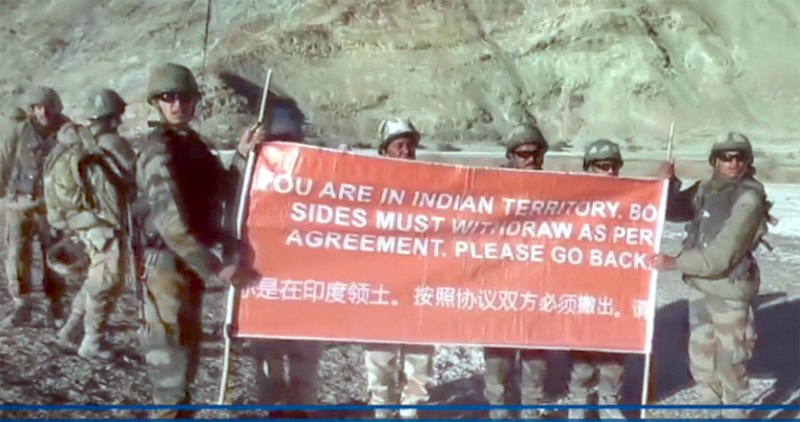 Both sides may create buffer zone

Marking a significant forward movement, the Indian and Chinese armies today announced that they have begun to disengage from the Patrolling Point 15 in the Gogra-Hotsprings area of Eastern Ladakh where the two sides have been locked in a standoff for over two years.

The announcement came around a week ahead of the annual summit of the Shanghai Cooperation Organisation (SCO) in Uzbekistan which is expected to be attended by Prime Minister Narendra Modi and Chinese President Xi Jinping among other leaders of the grouping.
There is speculation about a possible meeting between Modi and Xi on the sidelines of the summit though there is no official word on it from either side.
The beginning of the disengagement process in the Gogra-Hotsprings area is an outcome of the 16th round of high-level military talks in July, the two armies said in a statement.
“On September 8, 2022, according to the consensus reached in the 16th round of India China Corps Commander level meeting, the Indian and Chinese troops in the area of Gogra-Hotsprings (PP-15) have begun to disengage in a coordinated and planned way, which is conducive to the peace and tranquility in the border areas,” the brief statement said.
Official sources said that the withdrawal of troops from Patrolling Point 15 (PP-15) began this morning and the local commanders from both sides are working out the modalities for the subsequent measures.
There is a possibility of both sides creating a “buffer zone” or “no-patrolling” area, a mechanism that was created following disengagement in other friction points.
A thorough verification process to examine the implementation of the disengagement process will be carried out by the Indian Army at PP-15, according to a source.
It is learnt the high-powered China Study Group, comprising NSA Ajit Doval, the three service chiefs and a number of other top national security planners, is expected to meet in the next few days to review the overall situation in Eastern Ladakh.
Defence Minister Rajnath Singh and External Affairs Minister S Jaishankar attended some of the previous meetings on the Eastern Ladakh row.
Following the 16th round of Corps Commander-level talks, ground commanders of both sides held a series of negotiations on the nitty-gritty of the disengagement process.
Initially, around 30 soldiers from each side were in a face-off position in PP-15 but the number of troops kept changing depending on the overall situation in the region, people familiar with the development said.
“It is an important forward movement towards bringing down the tension in the region,” said an official on condition of anonymity.(PTI)
The sources said India will keep pressing for the resolution of pending issues in the remaining friction points of Depsang and Demchok.
India has been consistently maintaining that peace and tranquillity along the Line of Actual Control (LAC) were important for the overall development of bilateral ties. The two militaries held 16 rounds of Corps Commander-level talks to resolve the standoff.
As a result of a series of military and diplomatic talks, the two sides completed the disengagement process last year on the north and south banks of the Pangong lake and in the Gogra area. The disengagement in the Pangong Lake area had taken place in February last year while the withdrawal of troops and equipment in Patrolling Point 17 (A) in Gogra took place in August last year.
The 16th round of military talks was held 10 days after Jaishankar met his Chinese counterpart Wang Yi in Bali.
At the one-hour meeting on the sidelines of a conclave of foreign ministers of the G20 nations, Jaishankar conveyed to Wang the need for early resolution of all the outstanding issues in Eastern Ladakh.
The Eastern Ladakh border standoff erupted on May 5, 2020, following a violent clash in the Pangong lake areas.
Both sides gradually enhanced their deployment by rushing in tens of thousands of soldiers as well as heavy weaponry.
Each side currently has around 50,000 to 60,000 troops along the LAC in the sensitive sector. (PTI)