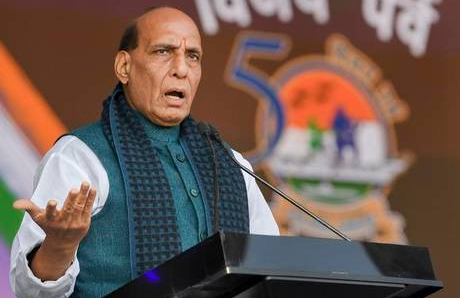 The minister inaugurated the “Wall of Fame-1971 Indo-Pak war” at Sunday’s event.

NEW DELHI, Dec 12: India won the direct war against Pakistan in 1971 and it will also win the ongoing indirect war against Pakistan-induced terrorism, Defence Minister Rajnath Singh said on Sunday.
The 1971 war showed that India’s division — at the time of its independence from the British rule— in the name of a religion was a “historic mistake”, he said.
“Pakistan wants to break India by promoting terrorism and other anti-India activities,” the minister said in his speech at the inaugural ceremony of ‘Swarnim Vijay Parv’ (Golden jubilee celebration) to commemorate India’s victory over Pakistan in the 1971 war.
The Indian armed forces defeated all its plans in the 1971 war and they are currently working to uproot the menace of terrorism, Mr. Singh noted.
“We won the direct war and I can fully assure that we will win the indirect war too,” he added.
The minister said the Indian government had planned to conduct this Swarnim Vijay Parv in more glorious manner.
“However, due to untimely death of the country’s first Chief of Defence Staff (CDS) General Bipin Rawat, his wife and 11 other armed forces personnel, it was decided to conduct this event with simplicity,” he mentioned.
“Today, at this event, I remember each one of them and pay my tribute to them,” he noted.
Rawat, his wife and 11 other armed forces personnel were killed when a military chopper carrying them crashed near Coonoor in Tamil Nadu on December 8. One person—Group Captain Varun Singh —survived the crash.
“Indian Air Force’s officer Group Captain Varun Singh is getting his treatment at the Command Hospital in Bengaluru,” Mr. Singh said.
“I am continuously in contact with him and we are regularly in contact with his father. We all pray that he is relieved from hospital soon after becoming healthy and he does his duty as before,” he mentioned.
Because of General Rawat’s demise, India has lost a courageous soldier, a capable advisor and a lively human being, he noted.
“He was extremely excited regarding this Swarnim Vijay Parv’s celebration. He discussed various issues related to the organisation of this event with me personally. Therefore, I miss him a lot today,” he mentioned.
The minister inaugurated the “Wall of Fame-1971 Indo-Pak war” at Sunday’s event.
He also visited the display of military equipment at the event.
He said the valour that was shown by the Indian armed forces during the 1971 war has always been a subject of pride for every Indian.
During the last one year, many events have been organised all across the country as a part of Swarnim Vijay Varsh celebrations (Golden jubilee year celebrations), he noted.
“The 1971 war was not just against the Pakistani army but also against injustice and atrocities. It was not just a victory of India over Pakistan, but also of justice over injustice,” he said.
This war is an excellent example of our democratic traditions, just behaviour and ethics and everyone in the world knows that, he said.
“India has never attacked another country and never occupied a single inch of another country. India helped in establishment of democratic traditions in Bangladesh and we are really helpful that in the last 50 years, it is moving really fast on the road of development,” Singh noted.
Bangladesh is a subject of inspiration for the entire world, he mentioned.
“This (1971) war also shows that India’s division on the basis of religion was a historic mistake. Pakistan’s birth took place in the name of one religion but it couldn’t remain as one,” he noted.
Since the 1971 war, Pakistan is regularly conducting an indirect war against India, he said.
“The feeling of antagonism towards India is so deep-rooted in Pakistan that it can be seen in the name that it has given to its missiles,” Mr. Singh noted.
Pakistan’s missiles have been named after the cruel invaders —Ghauri, Ghaznavi and Abdali—who invaded India, the minister added.
“Someone should ask the Pakistan government that these invaders also attacked the people living in the geographical area of Pakistan,” he said.
On the other hand, India’s missiles have been named such as Aakash (Sky), Prithvi (Earth) and Agni (Fire), he mentioned. (AGENCIES)