NEW DELHI, May 15:  The nationwide tally of confirmed COVID-19 cases crossed 85,000 today with more people testing positive for the deadly virus.
Going by the numbers declared by different States and Union Territories, India has now surpassed China’s official tally of 82,933 confirmed COVID-19 cases.
Though some new cases have emerged in the Chinese city of Wuhan — the epicentre of the deadly virus — less than 100 people are now undergoing treatment across China, which recorded 4,633 deaths due to COVID-19 but more than 78,000 have been discharged after recovery, as per their official data.
Globally, more than 3 lakh people have died and nearly 45 lakh have tested positive for the deadly virus since its emergence in Wuhan last December. While China and several other countries have begun reopening their economies, fresh concerns have begun mounting about a possible re-emergence of the virus.
India is now the 11th most affected nation in the world, but each one of the top-ten have one lakh or more cases. The US tops the charts with more than 14 lakh cases, followed by Russia, UK, Spain, Italy and Brazil with over 2 lakh cases each; and France, Germany, Turkey and Iran having over 1 lakh cases each.
In its morning 8 am update, the Union Health Ministry said the death toll due to COVID-19 across India has risen to 2,649 and the number of cases has climbed to 81,970, registering an increase of 100 deaths and 3,967 cases in the last 24 hours since Thursday morning. There are more than 51,000 active cases, while nearly 28,000 have recovered, giving a recovery rate of over 34 per cent.
However, a PTI tally of numbers reported by states and UTs, as of 9 pm, put the total number of confirmed cases across the country much higher at 85,538. This also showed at least 2,679 deaths and nearly 30,000 recoveries.
Bihar and Karnataka breached the 1,000-mark in terms of the number of people having tested positive, while testing and containment measures were ramped up in places like, Kerala, Goa and Manipur that were being seen as being mostly virus-free till a few days back. Even a quarantine centre had to be sealed in Manipur.
On the other hand, large numbers of cases continued to get detected in big urban clusters. Maharashtra, the most-affected state, reported 1,576 new cases to take its tally to 29,100, while its death toll rose to 1,068. Tamil Nadu crossed the 10,000 mark with 434 new cases, while Gujarat saw 340 more people testing positive to push its tally to 9,932.
According to the Union Health Ministry, 30 municipal areas account for 79 per cent of India’s Coronavirus infection caseload.(PTI) 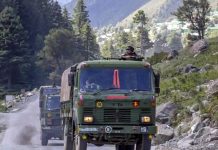