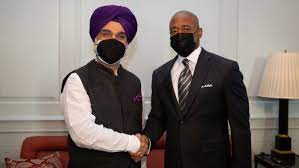 WASHINGTON, Feb 12: With a view to enhancing localised ties and people-to-people relationships, Indian Ambassador to the US Taranjit Singh Sandhu has stepped interactions with local city Mayors and Governors across the US.
This policy of the Indian Government assumes significance in the context of the growing clout of elected representatives in powerful metropolises – New York, Los Angeles and Chicago – in domestic and national politics.
Affirming this trend, US President Joe Biden has now nominated Los Angeles City Mayor Eric Garcetti as his ambassador to India.
In the last fortnight alone, Ambassador Sandhu has met with three dominant mayors. This is in addition to engaging senior American administration officials and over 40 of the 50 state governors.
Now, the Indian diplomatic mission here and the ambassador are making special efforts in its outreach to local administrations.
Last month, Sandhu met New York Mayor Eric Adams. An African American, law and order officer for over 20 years, he had a historic victory against progressives and projects a centrist view on law and order as opposed to calls for defund police.
Adams was in national spotlight when President Biden travelled to New York to roll out his policies on law and order in the mayor’s presence.
On 30 January, Sandhu met Mayor Adams and congratulated him on his historic election as New York City’s Mayor. He thanked the Mayor for his support to India-US partnership and to the Indian diaspora in New York.
Sandhu and the mayor held discussion on further bolstering the strong partnership between India and the City of New York with special emphasis on key areas including affordable healthcare, renewable energy, new and emerging technology, education and knowledge partnership, IT and fintech and space.
The meeting was followed by interaction with several prominent members of the city’s Indian-American diaspora
The ambassador has met Mayor of Edison, New Jersey Samip Joshi, who has his roots from Gujarat’s Shivrajpur. Edison has a significantly large Indian American population, in particular those from Gujarat.
Separately, the ambassador also met Aftab Pureval, another young and dynamic Mayor who was also the first Indian-origin candidate to become Mayor of Cincinnati.
Pureval’s father is from Punjab and mother is Tibetan. Cincinnati has a sister city relationship with Mysore in Karnataka. (PTI)