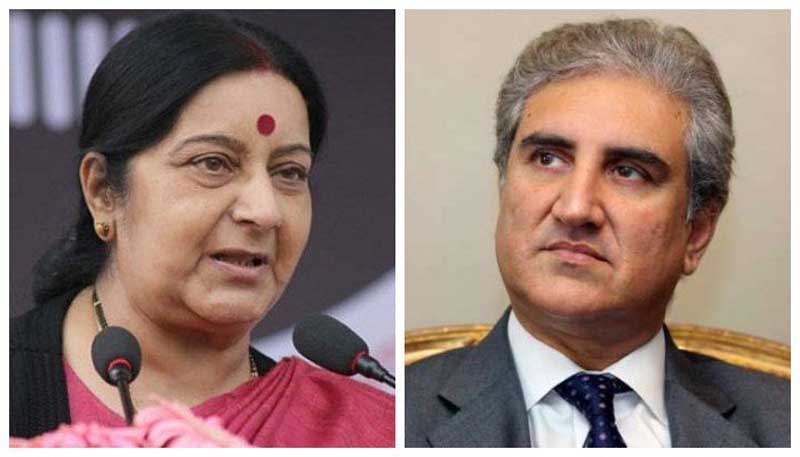 NEW DELHI, Sept 20: Foreign ministers of India and Pakistan will meet on sidelines of the United Nations General Assembly (UNGA) in New York, the Government announced today, the first such high-level engagement since suspension of dialogue between the two nations after the Pathankot air base terror attack in 2016.
Announcing the meeting between External Affairs Minister Sushma Swaraj with her Pakistani counterpart Shah Mahmood Qureshi, MEA Spokesperson Raveesh Kumar, however, made it clear it is not a resumption of the Indo-Pak dialogue and India agreed to the meeting following a request from Pakistan.
He also insisted the decision doesn’t change the country’s position on cross-border terrorism.
During the meeting, likely to take place next week, India is expected to strongly raise the issue of terrorism emanating from the Pakistani soil.
The Swaraj-Qureshi meeting will be the first engagement at this level since January 2016 when New Delhi halted the dialogue with Islamabad in the aftermath of Pathankot terror attack, for which India holds Pakistan-based groups responsible.
Indo-Pak ties have nose-dived since then in view of a number of terror strikes by Pakistan-based groups, which India retaliated by carrying out ‘surgical strikes’ in September 2016 across the LoC. India has been maintaining that terror and talks cannot go together.
“I must distinguish between a meeting and dialogue. This does not indicate any change in policy as far as our stand on terrorism and cross-border terrorism is concerned,” the MEA spokesperson said at a media briefing.
The last meeting between the two Foreign Ministers was held during Swaraj’s visit to Islamabad in December 2015 to attend the Heart of Asia Summit, where she had met the then Pakistan Foreign Minister Sartaj Aziz.
After the meeting, the two sides had announced resumption of Indo-Pak dialogue under the comprehensive bilateral format, but the initiative did not take off after Pakistan-based terror groups attacked the Pathankot air base.
Kumar said Swaraj will also attend the SAARC foreign ministers’ meeting on the sidelines of the UNGA.
India has been maintaining that there cannot be any comprehensive dialogue with Pakistan till it stops cross-border terrorism.
India agreed to Swaraj-Qureshi meeting following a letter to Prime Minister Narendra Modi by his Pakistani counterpart Imran Khan seeking a Ministerial interaction on the sidelines of the UNGA.
Separately, the Pakistan Foreign Minister has also written a letter to Swaraj reiterating Khan’s proposal for a meeting. Both the letters were handed over to India on September 17 by Pakistan High Commissioner, Kumar said.
The date for the meeting was being finalised by the permanent missions of the two countries in New York, he said adding the agenda for the meeting is yet to be finalised.
Swaraj is scheduled to leave for New York on September 22 morning and return on September 30.
Khan, who was sworn in as Pakistan prime minister last month, has been favouring resumption of talks between the two sides.
In his letter to Modi, Khan also indicated Pakistan’s willingness to discuss terrorism.
Asked about Pakistan’s push for a SAARC summit, Kumar said the atmosphere in the region is not conducive.
“There are number of other countries in the region who also felt that under the shadow of terrorism, it (SAARC summit) will be difficult to hold,” said Kumar.
Kumar said Swaraj will also raise the issue of Kartarpur Sahib during the meeting. The Kartarpur Sahib shrine in Pakistan is revered by Indian Sikhs, who have been seeking permission for easier access to go there for pilgrimage. (PTI)