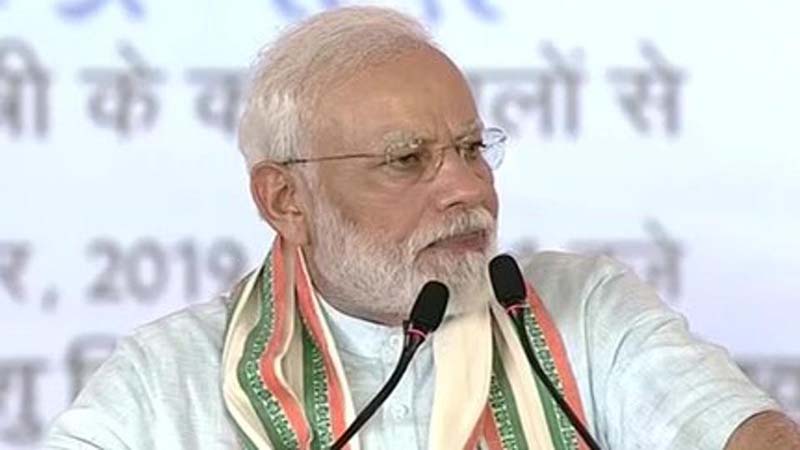 Sanjeev Pargal
JAMMU, Sept 11: Prime Minister Narendra Modi said today that entire world needs to take pledge and stand up against those giving shelter and training to the terrorists even as he declared that India is very much capable of tackling the menace of terror on its own.
He described the terrorism as “global threat”.
The Prime Minister’s hard stand against terrorism comes only a day after India snubbed Pakistan at the United Nations Human Rights Council (UNHRC) meeting in Geneva and described abrogation of special Constitutional provisions of Jammu and Kashmir on August 5 as its “sovereign decision”.
“Terrorism has become a “global threat” and this “ideology” is deeply rooted and flourishing in our neighbourhood (Pakistan),” Modi said on the anniversary of 9/11 attacks in the United States 18 years back.
His comments came while addressing “Swacchata Hi Seva” programme at Mathura in Uttar Pradesh.
Modi declared that India has taken some bold steps against terrorism in the past and will continue to do so in future. He added that entire world needs to take a pledge and stand up against those who give shelter and training to the terrorists.
At the same time, he said, India is very much capable of tackling the menace of terror on its own.
Asserting that terrorism has become an ideology which was not confined to the boundary of any nation, the Prime Minister said this is a global problem and has become a global threat.
“The deep roots of this threat are situated in our neighbouring country and are flourishing there,” he said in a reference towards Pakistan.
Modi said his Government’s effort to strengthen Anti-terror Laws is a step forward in tackling the menace of terrorism.
Last week, India designated Pakistan-based terrorists – Jaish-e-Mohammad’s Masood Azhar; Lashkar-e-Toiba’s Hafiz Saeed, Zaki-ur-Rehman Lakhvi, the mastermind and operational head of the 2008 Mumbai terrorist attacks and Dawood Ibrahim, the Indian underworld don believed to be in Pakistan after masterminding the 1993 Mumbai bombings as the individual terrorists. These were the first designations announced by India after an existing law was amended to expand its reach to also cover individual and not just organizations.
These four men have been on the US list of designated terrorists for a long time, along with their respective outfits (with the exception of Dawood Ibrahim, who doesn’t lead a well-defined group such as the LeT or JeM); and since past April, on the UN Security Council’s blacklist as well, with Azhar being the last addition as the result of a US-led effort to overcome years of resistance from China, acting on behalf of Pakistan. The United States offered a resounding endorsement of the designation of four Pakistan-based terrorists by India.
Modi said people need to unite whether the problem is sickness, pollution or terror.
Remembering the 9/11 attack, he said: “September 11 is also a special day for another reason, as it was on this day a century back when Swami Vivekananda delivered his historic address in Chicago. Through that speech, the entire world thoroughly understood the culture and tradition of India. But it is unfortunate that on that very September 11, the 9/11 terrorist attack took place in the US, and it shook the entire world.”
PTI adds:-
Earlier, launching a slew of programmes, including for country-wide cattle vaccination and checking use of plastics, Modi said that his Government is trying to maintain a balance between nature and economic development.
The world is looking for a “role model” for conservation efforts, but people of India have always taken inspiration from Lord Krishna’s “love for environment”, he said
“Environment and livestock have been at the core of India’s economic philosophy. And hence, be it Swachh Bharat or Jal Jeevan Mission or promoting agriculture and animal husbandry we always try to maintain a balance between nature and economy as we move forward to build a strong new India,” Modi said and stressed on adopting the concept of ‘waste to wealth’.
Greeting the audience with the local salutation of ‘Radhey Radhey’, he said, “The Brajbhoomi has always been inspiring the entire world and humanity. Today the entire world is searching for a role model for conservation of global environment.
“But, India has a source of inspiration like Lord Krishna, who cannot be imagined without his love for environment.”