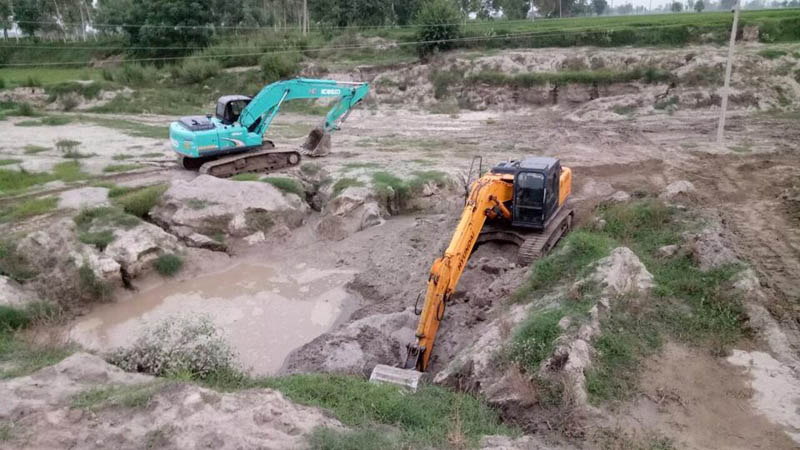 SRINAGAR, Oct 28: As the law executive bodies are busy in containing the crisis that developed after 5th August in the Valley, sand mafia is exploiting the situation for excessive mining by installing the sand excavation machines in Jhelum.
More than two and half months have passed since the special status to the State was withdrawn, the unpredictable situation that developed is proving condusive for the sand mafia to carry out illegal act and all this is done with the connivance of some tainted officials.
At the crack of the dawn sand diggers install the excavating machines on the Jhelum banks at various spots from Awantipora in Pulwama district to Rajbagh in Srinagar district. These machines run for 2-3 hours in the morning and excavate over hundred truckloads of sand which they ferry after dusk to their stores where they stock it.
“They operate for 2-3 hours in the morning. Then they left the excavated sand for the whole day in a trench dug to store the sand. During night hours they ferry the sand to some places where they can store the excavated sand. They then sell it at their own will,” a trucker said, adding that everything is done with the help of some officials.
High Court had banned mechanical excavation of sand on the plea that excessive mining can lead to degradation of rivers and the ecosystem. These machines have also weakened the banks of Jhelum thereby putting the Kashmir vulnerable floods.
While admitting they have been battling with the sand mining for a long time, an official said: “Some people are taking advantage of the present crisis and are indulging in the illegal activities like sand mining. Previously we have confiscated these machines to demoralise these culprits”.
When asked why they have failed to put a check on sand mining he said: “We have not failed but our priority at this is to bring Valley back to normalcy,” he added.
Before 5th August the Department of Flood Control and Irrigation carried raids at several places to stop the illegal practice but nothing has happened for the last two months.
As per the officials of the department there is a complete ban on these machines and only manual mining on boats is allowed. “Since there is a ban on these machines they see the lockdown as an opportunity to carry the illegal activities. It is very hard to put a check on their activities these days,” an official said.