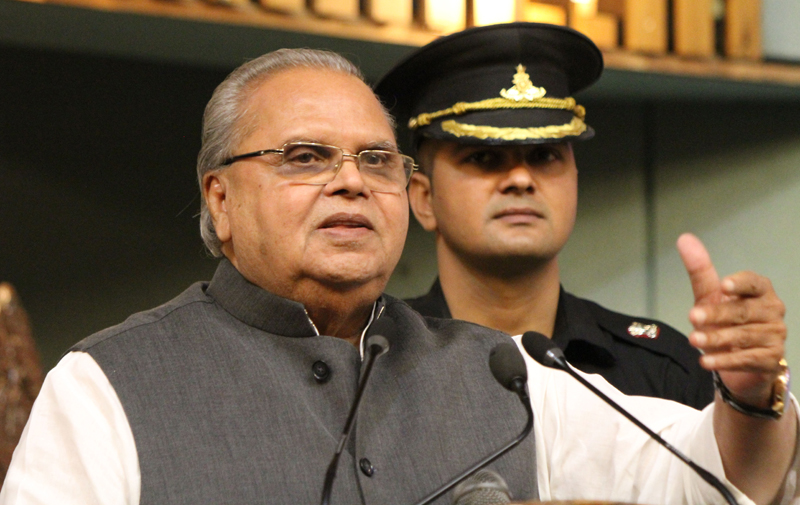 ‘Youth who shun violence will get two paradises’

Hails Mirwaiz for stand against drugs

Fayaz Bukhari
Srinagar, June 22 : Governor Satya Pal Malik today said that Hurriyat Conference leaders are ready for talks with Centre and described it as an encouraging sign. He said that those youth who shun violence will get two paradises.
Speaking at SKICC at a function here, Malik said that Hurriyat leaders who once shut the doors for the Minister in Modi Government, Ram Vilas Paswan, in Kashmir are ready to hold deliberations with New Delhi.

Click here to watch video
“I feel happy that the temperature in the Valley has gone down as compared to what it was during my arrival in Kashmir,” he added.
It may be mentioned here that Hurriyat Conference (M) chairman Mirwaiz Umar Farooq in an exclusive interview to Excelsior yesterday expressed his willingness to hold talks with Centre.
Governor praised Umar Farooq for raising his voice against the drug menace in the Valley. He said drug addiction is the big menace in Jammu and Kashmir, asking the officials to educate the youth and play a pivotal role in putting an end to such menace.
The Governor said that those youth who shun violence and return will get two paradises. “We don’t feel happy when a youth (militant) is being killed but we want them to return. However, the action against the forces will be retaliated. The youth (militants) are being befooled by saying that they will get paradise if they will be killed but the youth if return will get two paradise, one is Kashmir and if they live like practical Muslims then they will get the another as well,” he said.
Malik said that the militant recruitment in the Valley has almost stopped while as the stone pelting incidents especially after Friday prayers has also almost stopped.
He further stated that Jammu and Kashmir can be the best State as it has its own paradise as well as the Constitution. “There is a great communal harmony in Jammu and Kashmir. People here especially the younger generation has to be catered, if we put an end to their anger then the situation will be normalized,” he said.
He said that at least 22,000 students are studying outside Kashmir at present and his administration had told the officers to visit them in their college premises for their assistance.
Malik said efforts were on to open a multiplex in the Valley in order to provide an avenue for the entertainment-starved people here.
“I regret that there is nothing to do in Kashmir after 6 pm. Cinema halls are closed for decades now, coffee-house licence will take four years to get. There is no place where you can go,” Malik said.
“The people here are so lively that on holidays they will go to fields and parks to have their lunch there. We have not been able to give them any avenue of entertainment,” the Governor said. “Now we are trying to set up a multiplex. There is friend who is determined to establish a multiplex (in Kashmir).”
Cinema halls in Kashmir were closed down in 1989 by militant groups at the time of the eruption of insurgency. Efforts were made to revive some of the halls in early, but had to be closed again due to grenade attacks by militants.
Malik said Doordarshan had fulfilled the need for credible news and information in a place like Kashmir where “rumours become the news”.
“There are so many rumours here that it takes three days to put them to rest. They become news,” he said. “So a medium that is credible, believable and with wide reach was needed. You’ve done that.”
The Governor said while there were many traditional forms of entertainment in villages, there were no such things in cities. “They are dependent on TV and radio for entertainment and DD Kashir has addressed this problem to a large extent here,” he added.
Earlier, Governor distributed DD Free Dish Set Top Boxes among identified beneficiaries here today at an impressive function held at SKICC, Srinagar. A total of 30,000 DD Free Dish Set Top Boxes are being distributed by Information and Broadcasting Ministry in the State.
During his address, Governor congratulated the Information and Broadcasting Ministry for taking the initiative of reaching out to the people through Free Dish receivers.
Malik observed that today’s event marks a significant milestone for making a head start towards achieving the goal of reaching out to the people living in the far flung and border areas through the platform of DD Free Dish. He said that through these set top boxes, authentic information will be disseminated to the border residents where connectivity has always remained an issue.
He observed that Doordarshan has truly lived up to the responsibility bestowed upon it and the Kendra at Srinagar has been performing its duties despite many challenges. “It is playing an important role by representing the local culture through its programmes and reaching the people with unbiased information”, he added.
The Governor noted that DD Kashir has become popular in the State because of its good content and adding programmes in Dogri and Ladakhi languages will strengthen the composite culture of the State.