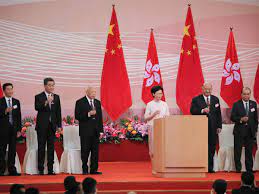 Hong Kong, July 1: Hong Kong’s incoming and outgoing leaders attended a flag-raising ceremony Friday marking the 25th anniversary of the return to Chinese rule for the city pulled in recent years under much tighter Communist Party control.
Chinese President Xi Jinping, who is making his first trip off the mainland in 2 1/2 years, was not present at the ceremony, although he will attend an inauguration ceremony for the new government later Friday.
On his arrival Thursday, Xi told well-wishers that Hong Kong has overcome many challenges over the years and had been “reborn from the ashes” with “vigorous vitality,” in an apparent allusion to the 2019 pro-democracy protests, which were followed by a sweeping crackdown on dissent that has transformed the economic hub once known for its political and civic freedoms.
The several hundred attendees at the flag-raising ceremony included city leader Carrie Lam, former leaders Leung Chun-ying and Donald Tsang, and incoming leader John Lee, who becomes the city’s new chief executive later Friday.
The flag-raising ceremony was held amid strong winds, and police officers carrying the Chinese and Hong Kong flags marched into the Golden Bauhinia Square for the ceremony with the Chinese “goose-stepping” style, replacing a British-style march. Guests stood at attention as the Chinese national anthem was played.
Xi last visited Hong Kong in 2017 for the July 1 celebrations, during which he warned that there would be no tolerance for any activities seen as threatening China’s sovereignty and stability.
The months of pro-democracy protests in 2019 were seen by China’s ruling Communist Party as just such a threat, and Xi in remarks Thursday evening praised Lam for ending chaos that had gripped the city and for ensuring that only “patriots” would rule Hong Kong.
Since the protests, Beijing and Hong Kong authorities drafted a national security law that was then used to arrest scores of activists, media figures and democracy supporters; introduced a more “patriotic” curriculum in schools; and revamped election laws to keep opposition politicians out of the city’s Legislature. The changes have all but eliminated dissenting voices in the city and have driven many to leave. (AP)