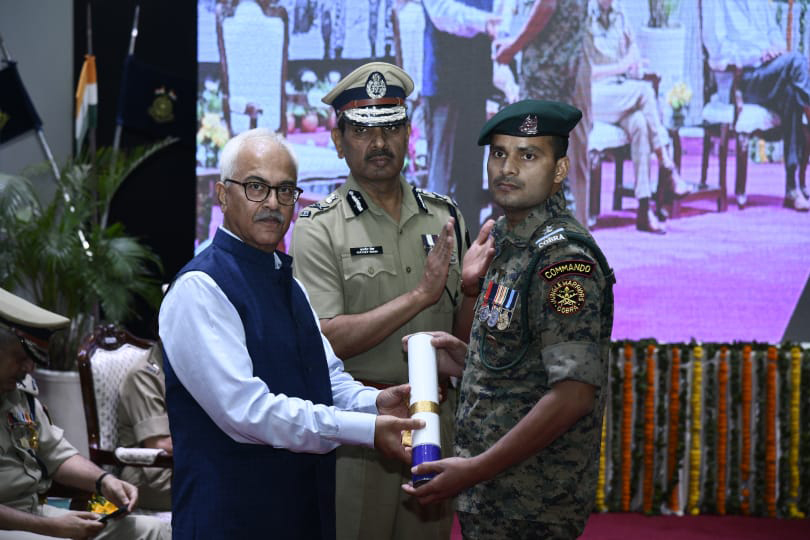 New Delhi, Apr 9: Home Secretary Ajay Bhalla on Saturday lauded the CRPF personnel for neutralising many hardcore terrorists in Jammu and Kashmir and ensuring security due to which tourists were flocking to the Valley.
Bhalla, while officiating as the chief guest at the ‘Valour Day’ event of the country’s largest paramilitary here, said while large-scale violence was anticipated in Kashmir post the abrogation of Article 370 in August 2019, the Jammu and Kashmir Police and the Central Reserve Police Force (CRPF) showed good cooperation and contained the violence to “a large extent”.
“The CRPF has a big role in ensuring the unity of India…in Jammu and Kashmir, over the last year, many hardcore terrorists have been killed and huge quantity of arms and ammunition has been seized by the CRPF and other forces,” he said.
“The cooperation between Jammu and Kashmir Police and the CRPF has been excellent and that has been beneficial,” he said addressing the troops and officers of the force at a camp in south Delhi.
He said it is due to the “hard work” of the CRPF jawans that many tourists are visiting Kashmir and there is a “sense of security” in the union territory.
“With the good deployment of local police and the CRPF, people know they can go to Kashmir safely…the flights to Kashmir are full and tourists are visiting . We feel good about it,” the home secretary said.
He said the force has got “expertise” in dealing with a variety of internal security challenges, be it counter-terrorism, insurgency or Left Wing Extremism.
“The CRPF has a good public image in dealing with law and order situations and the home ministry gets maximum demand from states for deploying your force whenever there is a challenge,” Bhalla said.
He asked CRPF commanders to use “optimum force with skill” while dealing with internal security issues.
Bhalla also expressed hope that the troops of the force will ensure good security for the annual Amarnath yatra in Kashmir that is expected to begin in June.
He complimented the force for moving from one conflict theater to the other on a quick notice as he praised its “logistical capabilities.” “At times, when you reach for a task, there is no facility….you have to stay in a school or some arrangement…only after sometime local administration provides facilities but we never get complaints (from the CRPF). This is very difficult but your training is very good and this is a big achievement,” he told the personnel.
The top home ministry bureaucrat decorated 97 personnel with gallantry medals apart from one posthumously, during the event.
It is in the memory of the battle of April 9, 1965, at Sardar Post in Gujarat that the about 3.25 lakh personnel-strong CRPF observes the ‘Valour Day’ annually.
The fightback by the force, which was posted for border guarding duties at the time, is considered one of the glorious chapters in the country’s military history when only two companies – about 150 personnel – of the force stood their ground and repulsed the Pakistani attack.
On the intervening night of 8-9 April that year, 3,500 men of the 51st Infantry Brigade of Pakistan and comprising 18 Punjab battalion, eight Frontier Rifles and six Baluch battalion stealthily launched simultaneous assault on the Sardar and Tak Posts under an operation code-named “Desert Hawk”.
The retaliation by the CRPF saw the numerically and armament superior Pakistan retreating the areas and leaving behind 34 bodies of their soldiers, including two officers.
Four Pakistani soldiers were taken as hostages while six CRPF men made the supreme sacrifice and the post was saved. (Agencies)