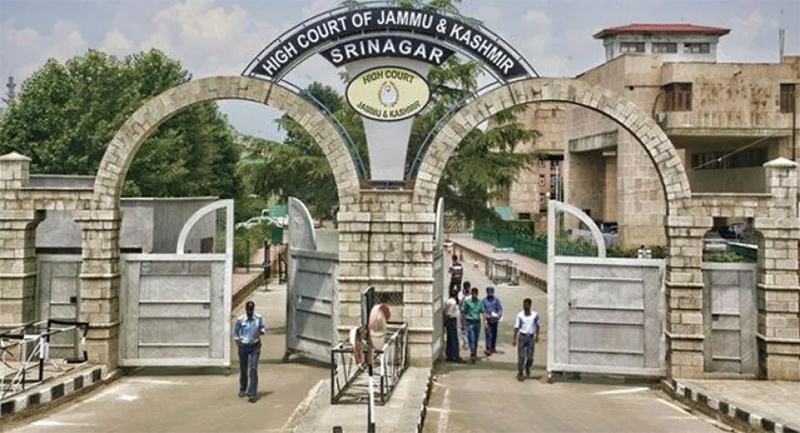 Excelsior Correspondent
SRINAGAR, Oct 17: The High Court has observed that public land is being exploited for commercial profits and the authorities are in collusion and complicit with the illegal acts and directed the Pahalgam Development Authority to initiate steps for eviction of the unauthorized occupants on State land and report action taken in this regard revealed on next date.
The Division Bench of Chief Justice Gita Mittal and Justice Puneet Gupta said the record revealed that the PDA has not taken effective steps at all with regard to protection and preservation of the Government lands.
Court said that the lessees whose lease have long expired are continuing to occupy the State Land and the PDA appears to have no record of the leases resulting into continuance of encroachments by the encroachers on Government and Forest land with impunity.
The DB also referred to the Apex Court directions and said these directions enjoined upon the State machinery repeatedly to protect the land from encroachers and illegal occupants.
The DB said the Supreme Court ruling binds this court also. The DB recorded that the lessees whose leases have expired and continued to occupy the Government land have no right to do so. “Disposition of the public property can only be effected in accordance with the law laid down by the Supreme Court by a public and transparent methodology”, it added.
The Court said that in law even renewal of leases are not granted as a matter of right and there is no such plan for renewals in place and the lessees continue to occupy Government Land without paying a penny to the Government resulting in huge loss to the public exchequer and those who are doing this have no right to do so.
Court made it clear that in case immediate action is not taken and the public property retrieved from the illegal and unauthorized occupants, it has to be presumed that the authorities are in collusion and complicit with the illegal acts. “It may be noted that such continued occupation of the public property may tantamount to criminal offences under the Indian Penal Code”, the CJ added.
It has been reported before the Court that a committee has been constituted by the Deputy Commissioner Anantnag which is carrying out the physical verification for pinpointing the encroachments and identifying the particulars of the encroachers over State/Forest land.
A direction has also been issued by the Wildlife Warden South Kashmir Division to submit the list of encroachments on the Wildlife land. “The said exercise shall be positively undertaken before the next date of hearing and action taken report shall be filed in this regard”, the DB directed.
Court has been informed that PDA has issued public notices through print media to all the owners of the existing structures to submit the complete site plans of their structures with photographs and allied documents within a stipulated period of 10 days.
“In case the site plan with photographs and allied documents which would include lease deed, permission, sanction, has not been submitted to the concerned authorities, it has to be presumed that these are the persons encroaching on the Forest/Government land”, DB said.
The DB directed that PDA and the Revenue Department shall forthwith take steps for completion of the exercise and initiate steps for eviction of the unauthorized occupants in accordance with law and submit action taken report before next date.
With regard to filing of applications seeking building permission and under the garb of permissions, court said large scale unauthorized constructions, expansions and encroachments are being effected.
Court said it is imperative to check this illegal activity as the unauthorized construction in this eco-fragile area is irreversibly damaging the environment and the damage is such that it cannot be compensated monetarily and not only the present populace but the generations to come will have to pay the price.
For the purpose, court directed the applications seeking construction, renovation and repairs in any building shall accompany with an affidavit by the applicant mentioning therein that he or she is not in illegal occupation and possession of any public land and forest land in the entire UTs of J&K and Ladakh.
A certificate from the DC and DFO is also necessary mentioning that the land is not public or forest land. Copy of original sanctioned plan with all documents of original sanction, previous permissions for additions, repairs, renovation, videography and photographs of the land must be with the application.
Court said the persons in illegal occupation of the public lands must handover such lands to the Government authorities and the authorities must take immediate steps to retrieve the public lands from the unauthorized occupants.
Court said these directions shall govern all lands and properties in the UTs of J&K and Ladakh and directed the authorities to file their action taken reports every six weeks regarding Pahalgam, Gulmarg, Sonmarg and all other such cases which are pending before the high court.
The responsibility of serving these directions has been put to Principal Secretary Law on all lands as well as Development Authorities viz PDA, GDA, SDA, Patnitop Development Authority, Jammu Development Authority and Srinagar Development Authority and all Municipal Corporations, Divisional Commissioners, Principal Chief Conservator Forests of J&K and Ladakh.
Court directed the Principal Secretary Law of both UTs to take steps of informing the general public about the directions of the court.