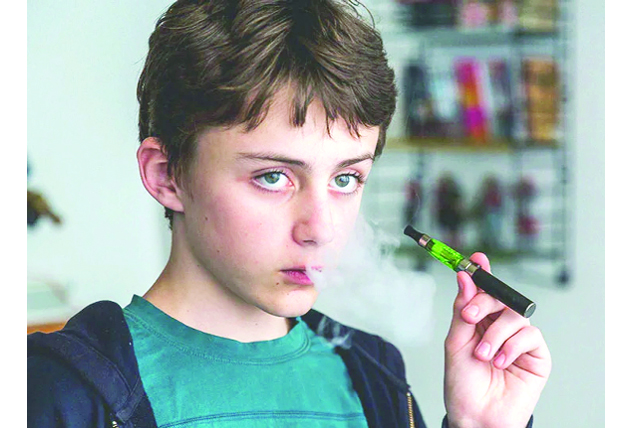 Samanwai Udhav
The teenagers around me have destroyed their lives forever; And this fact makes me feel the need to address a severe problem in our society, which is ignorance. It is ignorance which has led my companions to a point in life where they have created problems for themselves which are beyond repair.
They have practically ruined their remaining days on earth by giving into the ignorance of people around them and adapting practices which dismantle their physical and mental health. The practices I talk about originally came around to fix another major problem but became a lesson in irony. I am talking about the usage of E-cigarettes, more dominantly knowns as a vape, a device which was meant to help adults with getting rid of their traditional cigarette addiction but became a source of cheap dopamine for teenagers instead.
Vaping, the usage of an e-cigarette, is now a practice among teenagers which is glorified to be the ‘cool-club’ thing and anyone who denies to take it up as a habit becomes an outcaste.More and more teens start the usage of a vape because of how safe the pre-existing users makes it sound. Everyone promoting the usage of ane-cigarette is very pretentious about the safety of it and this is a direct outcome of
ignorance. In reality, they aren’t aware of the harmful effects themselves.They only agree to it being safe because they heard it was safe from the person who passed on the habit of vaping to them. It is a sort of anavalanche effect when it comes to promotion of vaping. New users convince non-users thatthey can get intoxicated at avery low risk and then new names are added to the list of users.
All of us have seen teenagers doing tricks like making smoke rings with vape smoke. It looks very amusing but eye candy isn’t nice ever. E-cigarettes come in flavours which sound very appealing and give a sense of safety. Who would ever think that a blueberry or strawberry flavored product would be so injurious to health. Flavoring is one of the major factors which captivates teenagers to get vapes because they sound yummy and low risk. While the risk may sound very less, in reality it isn’t. Just like any other intoxicant, vaping gets you addicted. You’re constantly compelled by your brain to pay money for poison because it makes you feel good for a brief period. When you buy a vape, you are literally handed a device full of actual poisonous chemicals. The e-liquid inside vapes, is a fluid composed of chemicals which pose multiple threats to your physical health. Like acetaldehyde and formaldehydewhich cause cancer; acrolein, diacetyl and diethylene glycol which cause lung diseases; Vitamin E acetatewhich causes lung injuries; heavy doses of nicotine, a substance widely known for how addictive and harmful it is.These were just the physical harms caused by vaping and yet,there are much more cons to it.
Talking about mental harms, when you vape, you are heavily dosing on nicotine and this causes your brain to release dopamine, the happy chemical, for practically doing nothing. You feel happy and satisfied even in your misery. This takes away from you, your purpose in life. Your flame of will is extinguished and you lose your motivation to attain the greater good. As a result, you startkilling your days doing nothing real.
Vaping takes a heavy toll on a person’s financial condition too. E-cigarettes, even after being so harmful, aren’t cheap at all. Parents are ignorant enough to give their children the money to buy a vape without asking for the purpose of needing money or monitoring the usage of it. Some parents are smart enough to not give allowance to their children but then the teens are forced into making morally wrong decisions and drooping down to stealing the sum. All because of their addiction.
Who is to blame for all of this? The answer is, everyone but none at the same time. While parents would never want their children to get involved in such practices, they fail in the upbringing of their children due to ignorance. They fail to realise what their children are up to. And while teenagers think they are smart and are taking the right decisions, in reality they aren’t smart enough.I know groups of teenagers who were strongly against vaping but are big addicts now because they couldn’t resist the urge to be a part of the ‘cool-club’. Teens as such decide to close their eyes on their original beliefs. They decide to ignore their morally correct inner-voice and shut it down forever.They take up bad habits as a form of recreation due to the direct outcome of their surroundings. They are ignorant to choose the wrong people as ‘friends’.Teachers who teach much to the youth are also to blame because they ignore to educate the youth when it comes to such real problems. It’s the government who takes a lot of actions against the abuse of intoxicants but fails to come up with strategies that actually work. It’s the business men who are ignorant enough to think that killing their own youth is a good business model. The business men who sell e-cigarettes to children regardless of their age because it’s so profitable to use children’s addiction against them.
How do we even fight this problem? Each one of us knows the answer and yet we fail to take action.