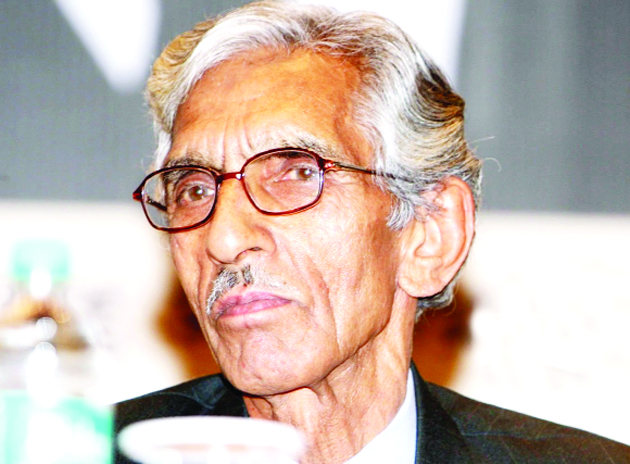 Mohammad Hanief
Rehman Rahi, throughout his career as a writer and university professor was committed to Kashmiri, a language he considered the source of Kashmiri identity and essential for preserving the ancient culture of a divided territory.
His original name was Abdur Rehman Mir was a Kashmiri poet, translator and critic. He was awarded the SahityaAkademi Award in 1961 for his poetry collection Nawroz-i-Saba, the Padma Shri in 2000, and India’s highest literary award, the Jnanpith Award for the year 2004 in 2007. He is the first Kashmiri writer to be awarded the Jnanpith, India’s highest literary award for his poetic collection Siyah Rood Jaeren Manz (In Black Drizzle). He was honored with Sahitya Akademi Fellowship in 2000 by Sahitya Akademi, New Delhi.
A celebrated Kashmiri poet who devoted his life to promoting and preserving the Kashmiri language and gave its poetry a distinct identity, published more than a dozen books of poetry and prose in Kashmiri and is credited with restoring the language spoken by more than six million people to the realm of literature, lifting it out of the shadow of Persian and Urdu, which once dominated the literary scene in Kashmir.
In the 1950s, he attended a poetry reading session in the village of Raithan in central Kashmir, where a Kashmiri poem was greeted with tremendous applause. Rahi then went onstage and read his work in Urdu, then the region’s official language.
That was the beginning of his long love affair with the language, which he described in his 1966 poem “Hymn to a Language”:
He also promoted Kashmiri in more concrete ways. He was one of the biggest supporters of a campaign to restore the language to schools, an effort that finally succeeded in 2000. He helped recruit teachers and scholars to teach Kashmiri and created a course to teach it to children.
More recently, his poems addressed the despair of the Kashmiri people living at the heart of a bitter and longstanding dispute between India and Pakistan.
Rehman Rahi was born on May 6, 1925, into a poor Muslim family in Wazpora area of Srinagar city.His father, Ghulam Muhammad Mir, a day labourer, died when Rehman was only 14 year old; his mother, Rahat Begum, was a homemaker. After the death of his father, he was raised by a maternal uncle.
Rehman studied Persian at Sri Pratap College and English at Kashmir University, earning a master’s degree in each language. He started writing while in college, adopting the pen name Rehman Rahi.
He worked briefly as a clerk in the department of Public Works, earning just a few cents a month and sometimes traveling dozens of miles to northern Kashmir for his job.
Rahi started his career as a PWD clerk in 1948. He was also working with Khidmat newspaper as a sub-editor briefly. In 1952 he did his masters in Persian and a decade later another master’s in English. For most of his career, he taught at the University of Kashmir.
He translated the works of Baba Farid into Kashmiri, while Dina Nath Naadim’s influence was apparent in his early works.
Rahi was passionate about a range of subjects such as Greek literature, Sanskrit kavya, and European modernism and was perhaps the most humble man in Srinagar.
Rahi was the youngest Indian to be given the SahityaAkademi Award in 1961 for “Nauroz-i-Saba”, a collection of his outstanding poems.
The Sahitya Akademi also honoured Rahi with Sahitya Academy Fellowship, India’s highest literary honour in 2000. The fellowship was given in recognition for his long contribution to Kashmiri literature and culture.
Rahi was the founder member of Kashmiri progressive writers’ movement called Cultural Congress. It was set up in 1947 and lasted till early ’60s.
In his early poems, he comes off as an idealist romantic, aspiring for a perfect world where all his young passions would find fulfillment. His poetic collection Nouroz-i-Saba bears the imprint of this mix of the progressive ideology and romantic aspirations.
The Jnanpith awardee left an everlasting impact on Kashmir literature. He introduced modernist ideas and views in literature belonged to a league of great poets who made immense contribution to the development of new thought processes in Kashmir poetry.
While Rahi was associated with the progressive writers movement and was the general secretary of the Progressive Writers Association, he was also influenced by the poet Allama Iqbal.
As a translator, Prof Rahi did an excellent translation of Baba Farid’s Sufi poetry to Kashmiri from original Punjabi. Camus and Sartre had some visible effects on his poems.
The doyen of Kashmir’s literature, Professor Rehman Rahi, died at the age of 98at his residence in the Nowshera area of Srinagar on January 09, 2023.
The legendary poet Rahman Rahi was an iconic figure as far as Kashmir’s vast literature is concerned. Undeniably, Rahi’s contributions to the Kashmiri language and poetry is unfathomable. He has written and translated over a dozen volumes, served as a mentor to hundreds of scholars and mentored many more. He received practically every honor for his contribution to Kashmiri language.
(The author is a columnist)