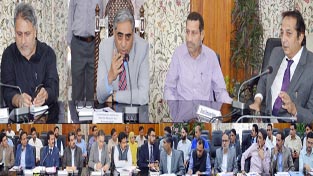 SRINAGAR:  Minister for Revenue, Ghulam Nabi Lone Hanjura, Wednesday asked the officials of Revenue Department to widen their role and perform duties with an objective to provide timely justice to the people.

The meeting was also attended by Assistant Commissioner Revenue and Sub District Magistrates of various districts.

During the meeting, the deputy commissioners gave a detailed overview of the functioning of Revenue Department in their respective jurisdictions and apprised the Minister about the performance of the department in providing revenue related services to the people and efforts taken to improve its overall functioning.

With regard to the status of disposal of revenue cases, the Minister said that all such cases need focused attention so that are disposed-off in a timely manner and justice is delivered to people.

Hanjura asked the DCs to retrieve the encroached state land and conduct field visits regularly and to maintain the land record on a real-time basis.

The Minister also reviewed the progress of Land Acquisition Cases for developmental works in various districts and was informed about the status of the amount received and disbursed to the landowners as compensation. He asked the DCs to expedite the payment disbursal process to the affected as soon they receive it form the indenting departments.

He said that the idea of holding the meeting is to get the first-hand appraisal of the department at district and other levels besides, taking steps to further improve its functioning after having close interaction with the field functionaries.

“Revenue department is a key to governance and the role of revenue officer is multifunctional,” Hanjura said, adding that every officer needs to be at the disposal of the public for effective and timely delivery of services.

He said the department is providing funding for the procurement of vehicles for the officers up to Tehsildar level. He said that besides this, instructions have been given to identify five-marla plots for the construction of Patwar Khanas.

The Minister asked the officers to ensure greater transparency while rendering services to the people and work with added zeal and zest. He said the people living in far-flung areas need a special attention and steps need to be taken to provide them services at their doorsteps.