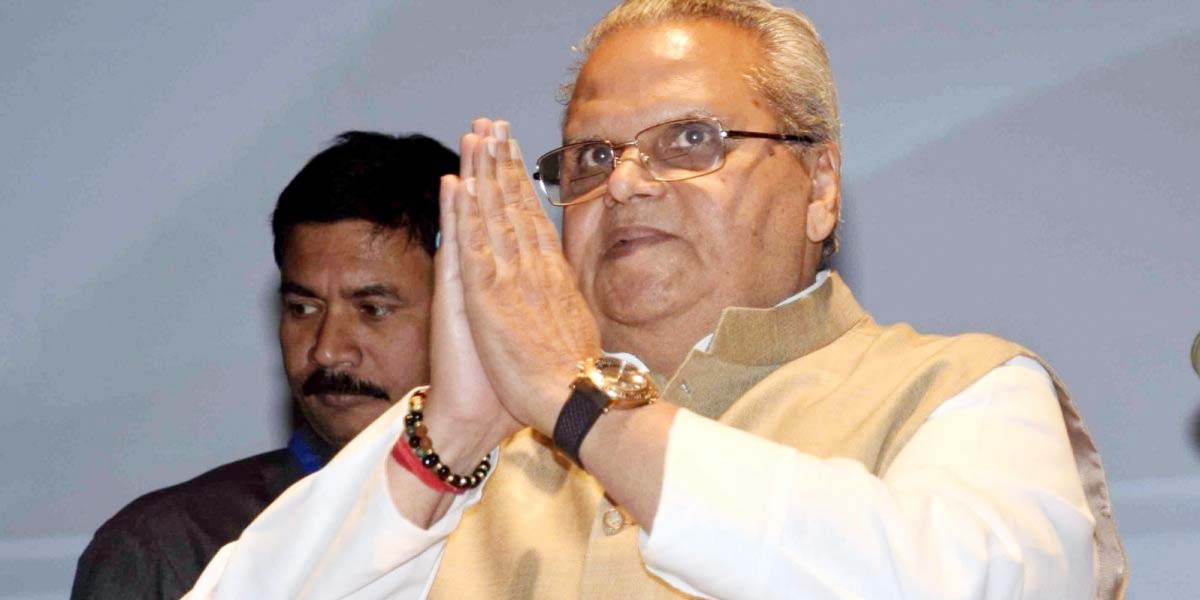 Sanjeev Pargal
JAMMU, Sept 22: Governor Satya Pal Malik has ruled out Government formation in Jammu and Kashmir through “defections in the political parties” and declared that once the process of Municipal and Panchayat elections was complete in the State, the Government will look at holding fresh Assembly elections as early as possible.
In an interview to a news web portal, Malik categorically ruled out postponement of ongoing Municipal and Panchayat elections in the State saying the process will go on and the Union Home Ministry is sending extra para-military forces to provide security to the candidates.
“We don’t want to cobble together a Government through any underhand means. After the ongoing elections to Urban Local Bodies and Panchayats, we will start looking at holding fresh polls to Jammu and Kashmir Assembly. There is no plan to form a Government by engineering defections,” he said.
The Governor told the news web portal that right now the priority of the Government is to hold peaceful and successful elections to Municipalities and Panchayats. “Once these elections are done peacefully, we will look at fresh Assembly elections as soon as possible,” he announced.
Malik’s statement assumed significance as the State Assembly still had a term of about two and half hours left and there had been speculations that the BJP could try to form a Government in the State after Panchayat and Municipal elections or even after Lok Sabha polls scheduled in April-May next year as the Legislative Assembly was kept under suspended animation by former Governor NN Vohra while imposing Governor’s rule in the State and not dissolved, thus, keeping options open for any Government formation in future.
Only yesterday, BJP general secretary and party’s pointman on Jammu and Kashmir, Ram Madhav had stated that if any group comes forward to form Government in the State after civic bodies elections, “we can give it a try”.
The PDP-BJP had formed Government in the State on March 1, 2015 after Assembly elections in November-December 2014. The State Assembly was constituted on March 17, 2015 and has term of six years unlike five years in rest of the States. The Assembly still has nearly two and half years of its term left as of now.
Malik declared that Panchayat and Municipal elections will not be postponed.
Asked by the news web portal whether in light of the increasing incidents of violence in Kashmir, the State would continue the process of Panchayat and Municipal polls, Malik said: “There is no way elections will be postponed. The process will be carried through. The Home Ministry is sending extra forces to provide security to candidates.”
The Governor said the security situation in Jammu and Kashmir was “improving”.
“The killings (of police personnel and some others) were just a reaction to the successes that the security forces had registered in anti-militancy operations,” he added.
Malik said: “In Ireland, terrorism was controlled in 30 years. But, we will end it soon. Our forces have established complete domination and have the upper hand. Our understanding is that just a handful of terrorists are left now”.
He said security forces have eliminated 15-20 militants during last one month without losing even one of our boys. He added that Jammu and Kashmir Police is at the forefront of anti-militancy operations and killing of unarmed SPOs yesterday showed frustration of the terrorists.
Declaring that security forces will punish those behind the killing of unarmed SPOs in Shopian yesterday, the Governor said the militants have come to the situation where they can only kill unarmed people. “If this is not cowardice, what it is? he asked and said the security forces were engaged in identifying perpetrators of the crime and they won’t be allowed to escape.
Asserting that “terrorism is not in the gun – it survives in the minds of the people and that is what needs to be addressed”, Malik said: “The alienation of the youth has to be addressed. That is our focus now. But, it can’t be controlled if we fight with them. We have to see how to address the issues pertaining to the youth”.
Malik said the only way to end J&K’s alienation was through development and talks.
“That is the only answer. Arguments will not get us anywhere. First generate goodwill (among the masses) and then hold talks. That is the only way forward,” he said, when asked if the Central Government plans to hold talks with Kashmiris.
Malik said talks will have to happen at some stage when they express the desire to talk. “But, I don’t want a situation similar to when our people went and Hurriyat leaders didn’t even open their doors”.
Asked if, when he was appointed Governor, he was given any mandate by the Central Government, particularly Prime Minister Narendra Modi, Malik replied in the affirmative.
“The Prime Minister’s mandate to me was to go to J&K and give clean, sensitive Government and carry out development work… development hasn’t happened in the State. The mandate is to show development,” he said.