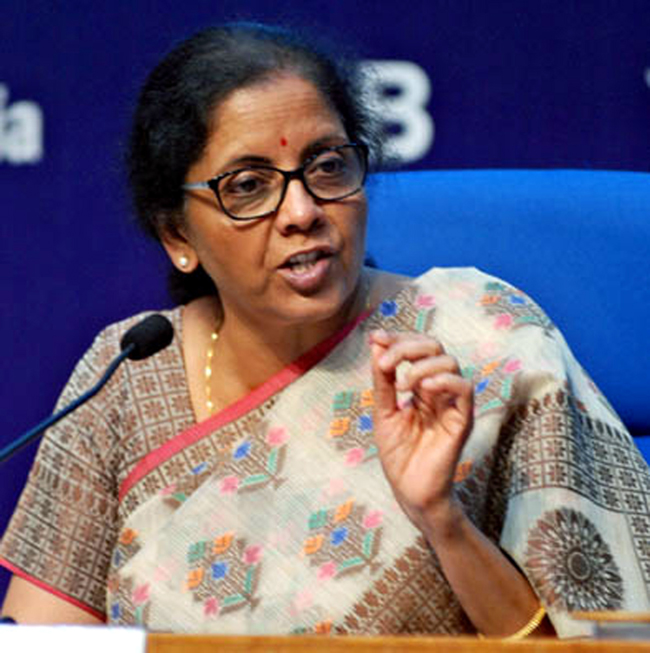 NEW DELHI, Aug 30:
Continuing its fire fight against an ever-deepening economic slowdown, the Government today unveiled a mega plan to merge 10 Public Sector Banks into four with a view to creating fewer and stronger global-sized lenders with robust balance sheets that can be used to boost credit and spur growth.
Finance Minister Nirmala Sitharaman, who had last week announced the first of three planned stimulus packages, made the announcement of the mergers just before official data showed that growth in Asia’s third largest economy slumped to an over six-year low of 5 per cent in the April-June quarter of 2019-20.
The mergers announced today, together with two set consolidations done last year, will reduce the number of Public Sector Banks to 12 from 27 in 2017.
At a media briefing, she said Oriental Bank of Commerce and United Bank will merge with Punjab National Bank to create the nation’s second-largest lender behind State Bank of India.
Also, Syndicate Bank will merge with Canara Bank while Andhra Bank and Corporation Bank would subsume into Union Bank of India, and Allahabad Bank will be amalgamated with Indian Bank.
Also, the Government will infuse Rs 52,250 crore in 10 banks to boost their balance sheets.
“Banks with a strong national presence and global reach is what we want,” Sitharaman said. “Scaling up will only allow them to have lot more resources and therefore the lending cost can come down.”
After the merger, India will have 12 “solidly present, well-consolidated, energised, adequately capital endowed banks,” she said. “We are trying to build NextGen banks.”
Minutes after the announcement, official GDP numbers for April-June were released, which showed economic growth slowing down for the fifth straight quarter to 5 per cent, the slowest since Q4 of 2012-13.
Sitharaman had last week unveiled the first of three planned stimulus packages that included a reduction of taxes, improvement of liquidity in the banking sector (formal and shadow), increased Government spending on auto and infrastructure, and accelerated refunds of goods and services tax (GST).
This was followed by liberalisation of foreign investment rules in four sectors, including coal mining, contract manufacturing, single-brand retail and digital media.
These, together with the announcement today and one more stimulus package possibly for the real estate sector in the next few days, are aimed at pulling out the economy from its worst showing in over six years.
Finance Secretary Rajiv Kumar said employee interest will be protected in the bank merger process.
In 2017, the Government merged SBI with five associate banks, which was followed by the merger of Dena Bank and Vijaya Bank with Bank of Baroda last year to create the third-largest bank by loans in the country.
The consolidation, the Government feels, will make bank balance sheets stronger with greater capacity to lend and strengthen them against piling debt.
Srikanth Vadlamani, Vice President, Financial Institutions Group, Moody’s Investors Service, said, “The announced consolidation of PSU banks is a credit positive as it enables the consolidated entities to meaningfully improve scale of operations and help their competitive position in segments such as corporate where their share of customer wallet tends to be low, and retail loans where their operations are sub-scale. The scale factor should also help them invest in technology where they fear very poorly compared to their private-sector peers.”
However, there will not be any immediate improvement in their credit metrics as all of them have relatively weak solvency profiles, he said. “Consolidation will also provide scope for improvement in corporate governance, and the measures announced to improve the functioning of banks’ boards are a step in that direction. These measures, though, are incremental rather than structural, and the quality of their implementation will determine their effectiveness.”
Sitharaman said Oriental Bank of Commerce and United Bank merger will merge into Punjab National Bank to create a bank with Rs 17.95 lakh crore business and 11,437 branches.
The merger of Syndicate Bank with Canara Bank will create the fourth-largest public sector bank with Rs 15.20 lakh crore business and a branch network of 10,324. Andhra Bank and Corporation Bank’s merger with Union Bank of India will create India’s fifth-largest public sector bank with Rs 14.59 lakh crore business and 9,609 branches.
The merger of Allahabad Bank with Indian Bank will create the seventh-largest public sector bank with Rs 8.08 lakh crore business with strong branch networks in the south, north and east of the country, she said, adding that Bank of India and Central Bank of India will continue to operate as before.
Last year, the Government had merged Dena Bank and Vijaya Bank with Bank of Baroda, creating the third-largest bank by loans in the country.
After the mergers, the country will have 12 Public Sector banks, including State Bank of India and Bank of Baroda. Also, Indian Overseas Bank, UCO Bank, Bank of Maharashtra and Punjab and Sind Bank, which have a strong regional focus, will continue as separate entities.
The Finance Minister also unveiled governance reforms in public sector banks, saying their boards will be given autonomy and enabled to do succession planning.
Also, bank boards will be given the flexibility to fix the sitting fee of independent directors, she said, adding that non-official directors will perform role analogous to independent directors. (PTI)