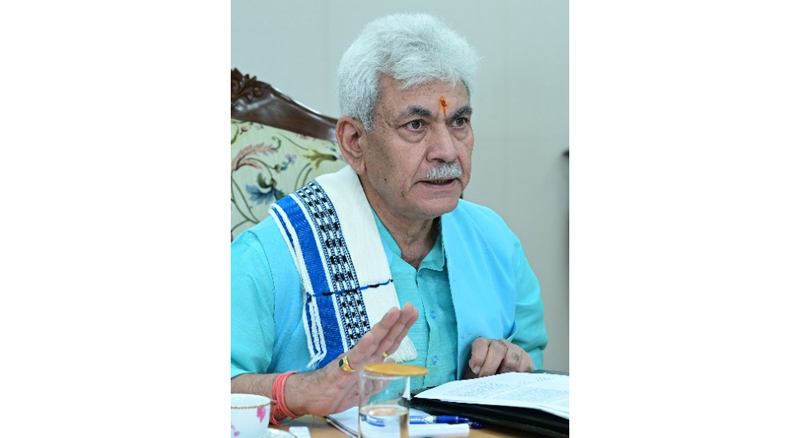 ‘If Mufti can contest from UP, why can’t others vote in Kashmir’

JAMMU, Sept 21: Lieutenant Governor Manoj Sinha said today that the Jammu and Kashmir Government will soon undertake a feasibility study and roads similar to those on the Char Dham route will be provided for Shri Amarnath Ji pilgrims.
He stated this in an interview to a national newspaper.
Admitting that better facilities can be provided to Shri Amarnath Ji pilgrims, Sinha, however, said, the topography is very difficult but the Government has developed a facility at Chandanwari for 3500 pilgrims and similar facilities will soon come up at other places.
“Pilgrims go on foot from Chandanwari. When I visited after the recent flash floods I felt a road can be built up to Baltal. The Government will soon undertake a feasibility study and roads similar to those on the Char Dham route will be provided here,” he said.
The Government had recently handed over the work on Baltal-cave shrine and Chandanwari-cave shrine tracks to the Border Roads Organisation (BRO).
Responding to a question over inclusion of outside voters in Jammu and Kashmir electoral rolls, Sinha asked: “If Mufti Mohammad Sayeed can contest the election from Uttar Pradesh and become the Home Minister, then why can’t others vote from Kashmir”?
“There were 32,000 outside voters in 2019 Lok Sabha Polls. They were called non-permanent residents. They could vote in Parliament elections, but not in the Assembly. However, under the Representation of People’s Act now, they can vote for Assembly elections as well,” he asserted.
On conduct of Assembly polls in Jammu and Kashmir, the Lieutenant Governor said the Election Commission is a Constitutional body and it has to decide on when elections will be held.
“The Home Minister has stated in the Parliament that first there will be delimitation followed by elections and, then at an appropriate time, Statehood will be restored in J&K. Now, delimitation work is over. Electoral rolls are being revised and new Polling Stations are being set up. When the Election Commission is satisfied, elections will be held,” he said.
“When the appropriate time comes, Statehood will be granted. The Home Minister has given an assurance to this effect in Parliament,” Sinha asserted.
The Lieutenant Governor said Jammu and Kashmir has made a big leap in agriculture, sericulture and horticulture in which 70 percent people are dependent.
He added that Jammu and Kashmir is No. 3 in farmers’ per capita income after Punjab and Haryana
“From a milk-deficit State, we are now surplus. Saffron is GI-tagged. Basmati rice is being exported. I am sure we will double the contribution of agriculture to Gross State Domestic Product (GSDP) in next three years,” Sinha said.
Asserting that security forces and police have upper hand against the militants, he said coordination among security forces is much better and perception of people towards the Government has changed.
He reiterated that earlier peace was bought but now it is being established. The Government is trying not just to eliminate militants but the entire ecosystem.
On the killing of migrant labourers, Sinha said security arrangements have been made in the places where they live. They will also be provided insurance cover, he added and said families of the victims were given Rs 11 lakh each as compensation. Further, the Government is contemplating to give jobs to their family members.
Referring to achievements during three years of abrogation of Article 370, he said now Dalits and West Pakistani refugees enjoy equal rights.
“Earlier, schools and colleges used to be shut for six months. Stone pelting was rampant. Hartal calendars were issued. Now, we issue academic calendars. Our broader objective is total integration and we are working on this wholeheartedly,” the Lieutenant Governor said.
On Kashmiri Pandits, Sinha said the Government of India sanctioned 6,000 jobs and 6000 houses for their rehabilitation. More than 2700 vacancies have been filled. Land has been identified for building houses. The Government will give 1200 flats to them in October while all houses will be allotted in one and a half years.
“The Kashmiri Pandits have been given jobs in safe places such as district headquarters. Their security concerns have been addressed,” he added.
“One of their concerns was that they were employed under a Special Package. So when other Government employees got promoted, they were left out. Now we have created supernumerary posts that include gazetted and non-Gazetted employees. We have promoted all eligible non-gazetted officers. For Gazetted employees, we have sent recommendations to the JK Public Service Commission. Those appointed in 2009 will be promoted in a few months. We have addressed all their pending issues. All that we can do we are doing. Nothing will be left to chance about their safety and well-being,” Sinha said.