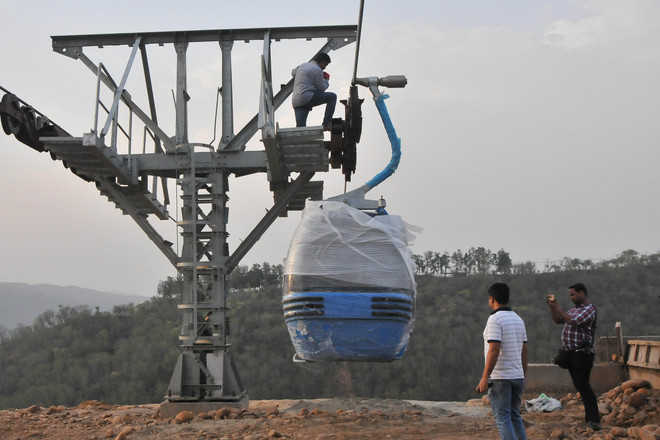 JAMMU, Feb 15: Government of Union Territory of Jammu and Kashmir will attract investors during the forthcoming Global Summit to be held in the capital cities of Srinagar and Jammu for the installation of ropeways at four famous tourist and religious destinations, which have been found suitable for providing such a facility.
Official sources told EXCELSIOR that on the instructions of the Government, the Jammu and Kashmir Cable Car Corporation has conducted pre-feasibility study for the installation of ropeways at Mansar and Bhaderwah in Jammu region and Shankaracharya Temple and Yusmarg in the Kashmir valley.
Mansar and Bhaderwah, the famous tourist destinations of Jammu, are attracting lakhs of tourists from different parts of the country every year while as Shankaracharya Temple located on a hill near Srinagar is visited by large number of people particularly during the peak tourist season. Similarly, Yusmarg located in Budgam district is among the most famous tourist destinations of the Kashmir valley.
“The installation of ropeways at all these four destinations has been found economically viable by the Jammu and Kashmir Cable Car Corporation, which has submitted the pre-feasibility reports to the Tourism Department”, sources said, adding “all these four projects would be part of the presentation to be made by the Tourism Department during the forthcoming Global Investors Summit on tourism sector”.
They further said, “the objective behind making presentation is to attract investors for installation of ropeways most probably in the Public Private Partnership (PPP) mode”, adding “if the ropeways are installed at all these four locations there will be sharp increase in the tourist footfall and subsequent improvement in the economic condition of the people residing in the vicinity of these destinations”.
As far as Mansar is concerned, the Cable Car Corporation has suggested installation of ropeway from the point near Jammu and Kashmir Tourism Development Corporation (JKTDC) hut to a nearby mountain. Though the length of the ropeway would be less than half a kilometre yet it would be major attraction point for the tourists, sources said while disclosing that nearly 10 lakh tourists visit Mansar every year.
Similarly, the Cable Car Corporation has found feasibility for installation of one kilometre long ropeway at Bhaderwah after conducting detailed study of different points of tourist attraction, sources said while disclosing that during the past some years Bhaderwah has become favourite destination for tourists from different parts of the country particularly Mumbai.
About world-famous Shankaracharya Temple in Srinagar, sources said, “a plan to install ropeway was mooted several years back but the same was shelved on the ground that this project would lead to cutting of large number of trees”, adding “now the Cable Car Corporation has recommended that ropeway can be installed even without cutting the trees by adopting the model of Patnitop where Gandola has been installed with minimum cutting of trees”.
“By adopting the model of Patnitop ropeway the Government would be able to easily receive mandatory clearances which was not the case with the earlier plan”, sources further said.
As far as Yusmarg is concerned, the Cable Car Corporation examined three different sections but finally put the weight behind lake water view point to a spot along the Bargah road as the same is trees free zone and would not involve seeking of forest and environment clearances, sources disclosed.
“The ropeway type for all these four locations would be different from each other keeping in view the terrain and length”, they said in response to a question, adding “the Government would leave no stone unturned to attract investors for installation of these ropeways during the Global Investors Summit”.
It is pertinent to mention here that Global Investors Summit will not only help to present business-friendly policies of the Government and identify business opportunities in J&K to participating trade and industry organizations but also harmonize J&K’s intrinsic strength and aspirations of development and employment opportunities.