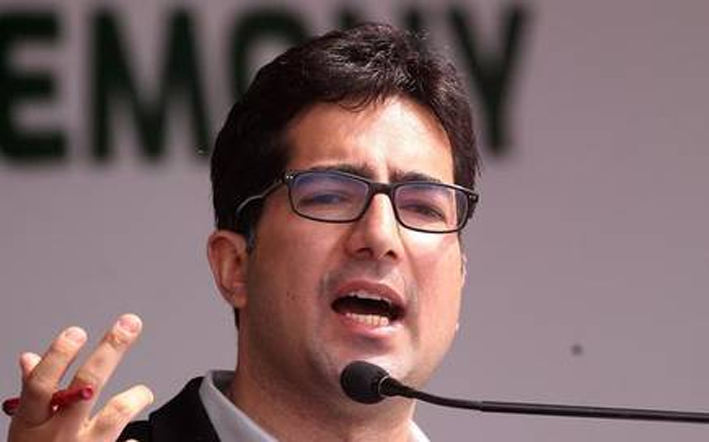 Excelsior Correspondent
Srinagar, Feb 15: Former IAS officer and head of People’s Movement, Shah Faesal, was today booked under the Public Safety Act (PSA) taking the number of mainstream leaders who were booked under the Act since August last year to 8.
Click here to watch video
On August 14 last year, over a week after the Centre repealed Article 370 that accorded special status to J&K and bifurcated State into two Union Territories of J&K and Ladakh, Faesal was stopped from flying out of the country at the Delhi airport and sent to Srinagar, where he was placed under preventive detention.
Faesal, a topper of the 2009 UPSC Civil Services Exams, resigned from the Government services and joined mainstream politics in January 2019. Two months later, he launched his own political party, the Jammu and Kashmir People’s Movement.
Shah Faisal was served the dossier and booked under PSA today. He became 8th mainstream politician to be booked under the PSA. On Feb 8, authorities slapped PSA on Hilal Lone, former Deputy Advocate General of Jammu and Kashmir State and son of NC Member Parliament from Baramulla, Mohammad Akbar Lone.
The administration besides slapping PSA against former Chief Ministers – Dr Farooq Abdullah, Omar Abdullah and Mehbooba Mufti -invoked the law against NC leader Ali Mohammad Sagar, PDP leaders Sartaj Madni and Naeem Akhtar since February 5.
The first mainstream leader to be booked under PSA was Dr. Farooq Abdullah. He is, however, lodged in his own house at Gupkar, Srinagar. So far over 400 people were booked under law in Kashmir since August 5. However, around two dozen of them were released but 396 are still under detention under the controversial law.
Thirty five mainstream politicians were moved from the Centaur hotel on the banks of the Dal lake to the MLA hostel in November 2019 and most of them have been released now or have been booked under PSA.
Now, only five politicians are in the sub-jail MLA hostel. Two of them Shah Faisal and Hilal Lone are under PSA while three Ali Mohammad Dar, Peer Mansoor and Bilal Sultan are under preventive detention. Sources said that these three leaders will be released soon and two others booked under PSA will be shifted out of MLA hostel.