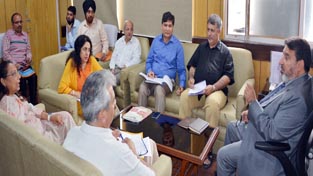 Excelsior Correspondent
JAMMU, Apr 3: Minister for Finance, Education, Labour and Employment, Syed Mohammad Altaf Bukhari today underlined the need for judicious use of funds, adding that the Government has vowed to show zero tolerance against over-estimation of projects and unfruitful expenditure.
Reviewing progress on the infrastructure development projects for Cluster University Jammu (CLUJ) (rechristened as Tawi Cluster University) at a high-level meeting, the Minister asked the executing agencies to project accurate estimates, while framing Detailed Project Reports.
“There is no dearth of funds particularly for key sectors like education but wastage of public money by inflating project cost will not be tolerated by the Government”, he warned while expressing displeasure over lingering on of some projects taken up under RUSA in different constituent colleges of Jammu Cluster University.
Pulling up engineers for not meeting timelines, the Minister (Pro Chancellor CLUJ) set 15-day deadline for completion and handing over of the main campus CLUJ building and academic blocks in the five constituent colleges. He said the Chief Minister would be approached for inauguration soon after handing over of the newly constructed campus of the prestigious varsity.
The meeting was attended by Vice- Chancellor CLUJ, Prof Anju Bhasin, Principal Secretary, Higher Education Dr Asgar Samoon, Chief Engineer R&B, Jammu, MD JKPCC, heads of constituent colleges and other senior functionaries of HED, Engineers from PHE, Sports Council and R&B.
It was informed that the Government has provided Rs 51 crore for construction of 18 projects including main campus building, new class room blocks, library, canteen blocks, auditoriums and other academic infrastructure in all the five colleges. It was informed that 16 projects have been completed while work on two components is in progress.
Meanwhile, Altaf  Bukhari said that the university campus would be inaugurated by the Chief Minister Mehbooba Mufti and asked the executing agency to complete the pending works and start handing over process of accomplished buildings to the university administration and heads of the constituent colleges.
The Minister also asked for expediting the process for framing of estimates under heritage college development project for the institutions identified in Srinagar and Jammu cities.   He also directed for intimating UGC and other authorities about rechristening of Cluster University Jammu and Cluster University Srinagar as Tawi Cluster University and Jehlum Valley Cluster University, respectively, as proposed by the State Government.