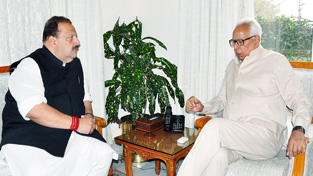 Excelsior Correspondent
JAMMU, Apr 3: National Conference Provincial President and MLA Devender Singh Rana today presented to Governor N. N Vohra, a copy of the Detailed Project Report on revival of old heritage route to Shri Mata Vaishno Devi Shrine passing through ancient temples and worship places spread across Nagrota Assembly Constituency, originating from historic Kole Kandoli Temple.
Rana apprised the Governor, who is also Chairman Shri Mata Vaishno Devi Shrine Board, at Raj Bhawan here this morning about the salient features and brief details of the report, prepared by Indian National Trust for Arts and Cultural Heritage INTACH and strongly pleaded for adopting and developing this heritage route for bestowing spiritual bliss to the devotees thronging from across the country and even abroad.
“The route, passing through serene environs and spiritual ambience, offers spiritual solace and Darshan of several revered temple which used to pre-requisite before embarking on the yatra to holy Bhawan on Trikuta Hills over seven decades ago”, Rana told the Governor, adding that it will be appropriate for the Shrine Board to explore this route optimally and undertake its all round development.
He said the INTACH has prepared the exhaustive report after carrying out detailed mapping of all the important heritage assets like step-wells, ponds,  sarais, wells, temples and springs along the trails, which were once used and maintained by the pilgrims.
The route starts from village Jagti (Nagrota) on the National Highway 1A and passes through Jagdamba Mata Kheer Bhawani Temple – Jagti, Durga Mata Temple – Pangali, Shiv Temple – Thandapani – Drabi, Shiv Shakti Temple, Raja Mandleek Temple-  and Raja Nowalgarh Temple – Marh, Drabi,  Kali Mata Temple – Gundla Talab, Ram Darbar, Shiv Temple- Bamyal and Oli Temple Chhapanoo-Bamyal. By reviving this route, he said, adding the devotees could back home after paying obeisance at the Durbar of the Mata with enlightenment they have been searching all their life.
He highlighted the religious, spiritual and secular characteristics of the ancient route during yesteryears, saying while it used to take off amid serene and spiritual ambience of the highly revered Kol Kandoli Mata Temple, the pilgrimage used to reach Nomain, where the Jyot (holy light) used to be carried by white turban bedecked Gujjars over their heads in true spirit of Jammu’s secular ethos.
Rana informed the Chairman, SMVDSB that promotion and development of this route had been recommended by the State Administrative Council during the Governor’s rule which had encouraged in having the DPR prepared.
He told the Governor that this monumental heritage route has suffered neglect for decades even though the bliss of revered shrine on Trikuta Hills had transcended continents. “We have been envisioning restoration of this route and have many expectations from the Shrine Board”,the MLA Nagrota said, adding that the opening of the route to pilgrim traffic will enable the devotees know about the rich heritage of the historic place in the footsteps of Maa Vaishno Devi.