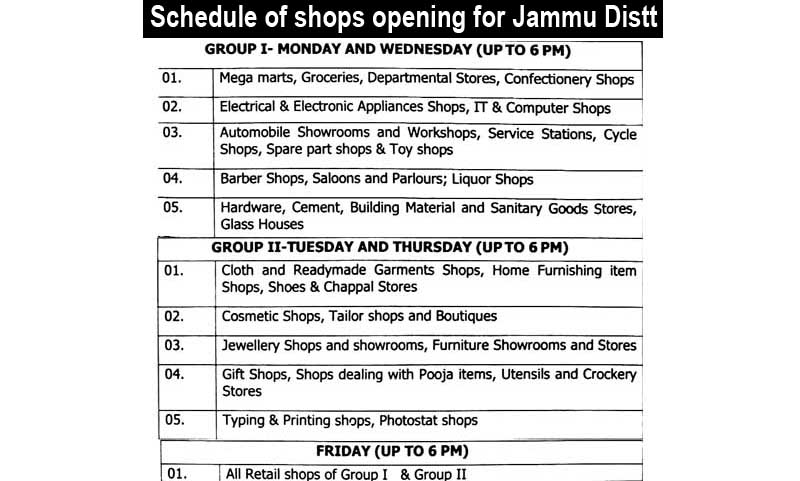 Fresh roster for opening of shops in Jammu distt issued

Excelsior Correspondent
JAMMU, June 13: The Union Territory administration today announced further easing of restrictions in eight districts—four each in Jammu and Kashmir divisions while the authorities in Kathua ordered that J&K bound passengers will be allowed to cross Lakhanpur without COVID testing if they possess RTPCR negative report of last 48 hours even as seven more persons including a Government Lecturer, two youth and a woman succumbed to the virus in Jammu region and 229 others tested positive.
The decision to grant relaxations in Poonch, Reasi, Ramban and Doda districts of Jammu region and Shopian, Kulgam, Ganderbal and Bandipora in Kashmir division was taken at a meeting which focused on total weekly new cases (per million), positivity rate, bed occupancy, case fatality rate and vaccination coverage of the targeted population, an official order issued by Chief Secretary Arun Kumar Mehta, who also happens to be the Chairpersons State Executive Committee (SEC), said.
It said Government and private offices can function in the eight districts without any restrictions subject to strict adherence to COVID-appropriate behaviour, while barber shops, salons and parlors are permitted to open on all days of a week, except on Saturday and Sundays.
Similarly, standalone shops, outdoor bazaars and shopping complexes are also permitted to open on all days except the weekends, the order said, and added that wholesale trade of liquor shall continue to be permitted to operate on five days a week (except Saturdays and Sundays) in the entire Union Territory.
The order further said there was a need for further improvement with regard to the COVID situation in all districts.
“Some districts need intense efforts to reach desired levels. As such, there is a need to continue with existing COVID containment measures in these districts,” the order said.
It directed the District Magistrates to strictly ensure that there is full compliance to COVID-appropriate behaviour and defaulters are firmly dealt with under relevant Sections of the Disaster Management Act and the Indian Penal Code.
The Jammu and Kashmir administration started the unlock process in the Union Territory on May 31, limiting the month-long Corona curfew to night hours and weekends only while allowing operations by shopkeepers on a rotational basis.
Another order issued by District Magistrate Kathua Rahul Yadav said that all passengers entering Jammu and Kashmir and carrying COVID RTPCR negative report for the test conducted during last 48 hours will be allowed hassle free movement without subjecting them to subsequent testing at Lakhanpur, the gateway to Jammu and Kashmir as well as Railway Station Kathua.
Meanwhile, the district Jammu administration today revised the weekly roster for opening of shops from tomorrow.
Instead of earlier schedule of some shops opening for three days and others for two days on rotation basis, now establishment mentioned in Group I will open on Monday and Wednesday while those in Group II will open on Tuesday and Thursday while all retails shops of Group I and II will remain open on Friday.
Timing of the shops has been extended by an hour from 5 pm to 6 pm.
All kind of wholesale establishments will open for four days from Monday to Thursday up to 6 pm.
An order to this effect was issued today by District Magistrate Jammu Anshul Garg.
Meanwhile, an 18-year-old girl hailing from village Gunthal in Surankote tehsil of Poonch district died of Coronavirus in the Government Medical College (GMC) Rajouri. She had no co-morbidity. A 19-year-old youth from Bihar presently putting up at village Dalyote in Kalakote tehsil of Rajouri district where he was working also succumbed to the virus in the GMC Rajouri.
A 58-year-old Government Lecturer hailing from Shiva Nagar in Kathua district and posted in Government Higher Secondary School Nagri died of some ailments and Coronavirus at the GMC Jammu. Another death was reported from Kathua town. The victim was 60-year-old and passed away at GMC Kathua.
A 70-year-old man from Traranwali in Poonch died at Community Health Centre (CHC) Surankote due to COVID Pneumonia while an 80-year-old man from Bhera Mendhar in Poonch breathed his last at home. He was positive for the virus for last four days.
A 59-year-old man from Bhagwati Nagar in Jammu died of cardiac arrest and COVID-19 at Chauhan Multispecialty and Trauma Centre Pathankot.
Seven deaths have taken Corona casualties in Jammu region to 2037 with Jammu district accounting for highest 1116, Rajouri 204, Kathua 149, Udhampur 131, Samba 117, Doda 96, Poonch 86, Ramban 58, Reasi 41 and Kishtwar 39.
Meanwhile, out of 229 persons who tested positive for COVID-19 in Jammu region today, maximum 55 belonged to Doda district, 38 in Jammu, 36 Rajouri, 30 Poonch, 22 Ramban, 20 Kishtwar, eight each in Samba, Kathua and Reasi and four in Udhampur district.
As against 229 new cases, 698 persons recovered from the virus today, the maximum 329 in Jammu district, 90 Rajouri, 64 Ramban, 54 Doda, 43 Samba, 42 Udhampur, 36 Kathua, 24 Kishtwar and 16 in Reasi district.
Jammu region’s Corona count has now reached 1,16,992. Among them, 5546 are active positives as 1,09,409 persons have recovered from the virus and there have been 2037 casualties.
Meanwhile, the Union Territory of Ladakh today reported 38 new Corona cases including 32 in Leh and six in Kargil district. No COVID casualty was reported in Ladakh today.
New cases have taken Corona count in Ladakh to 19544 including 746 active positive cases and 18601 recoveries besides 197 fatalities—143 in Leh and 54 in Kargil.