Excelsior Correspondent
RAMNAGAR, July 12: While lauding the Governor SP Malik for his statement that strict action would be taken against ‘forest thieves’ and others who looted the forest wealth over the years, NPP chairman and former minister Harsh Dev Singh expressed the hope that the politicians and bureaucrats who were involved in plunder of forest resources and encroachments on forest lands would be brought to book.
While reminiscing the solemn resolve of the Governor during a plantation drive in Zabarwan hills, to catch such big fish who had minted millions and constructed palatial Bungalows in the state and elsewhere by misusing forest resources, Singh said that such initiatives needed to be supported by one and all. He said that the people eagerly awaited action against the forest mafia who had accumulated huge wealth by destroying forests besides retrieval of all encroached forest lands from these politicians and bureaucrats.
Addressing public meetings at villages Sail Kori Bair and Bharnara of Majalta tehsil today, Harsh Dev said while the poor and un-influential alone are targeted, the big and mighty are granted immunity from punitive action despite their unfair deeds and highly irregular practices. “The Governor must start from the upper side. For, the cleansing of staircase must always begin from the top. And thats precisely what he promised during the Zabarwan meeting in Srinagar”, Singh said.
Pointing towards large scale destruction of trees including Deodar in the Ramnagar, Udhampur (Dudu-Patnitop), Batote, Bhaderwah, Doda and Billawar (Bani) Forest Divisions, Singh said that forest mafia had constructed houses not only in Vasant Vihar and Maharani Bagh as pointed out by Governor but elsewhere also with the help of such dirty money. He said that several Ministers and MLAs were reported to be in possession of huge forest lands with no cognizance having been taken in the past due to political clout enjoyed by them. He said that several Ex-MLAs had raised palatial mansions and used unaccounted Deodar scants for woodwork in their houses which was prominently highlighted in media but no action was taken against them.
Singh expressed the hope that Governor would keep his word and initiate stern action against all ‘forest thieves’ without any bias and without any regard for the party to which the culprits were affiliated. 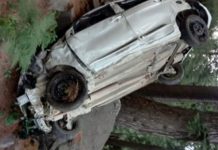 Ram temple will be opened for devotees soon: Champat Rai