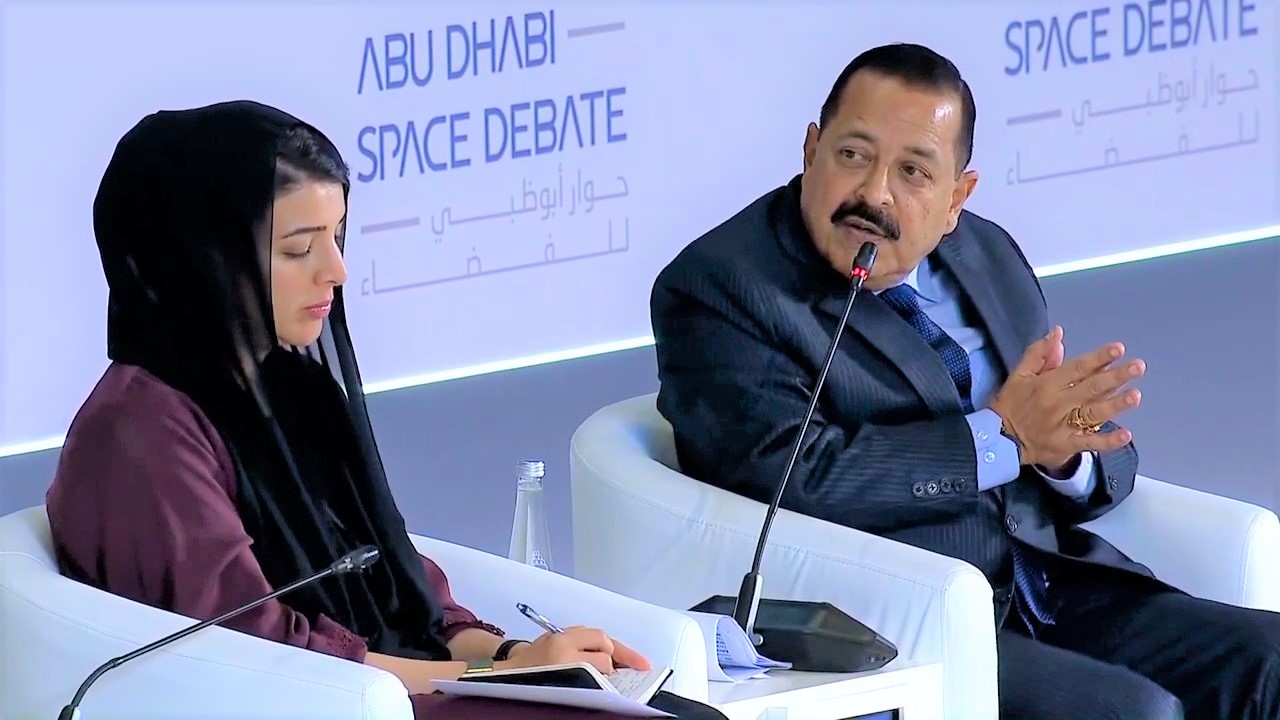 ABU DHABI (UAE), December 6 : Union Minister of State (Independent Charge) Science & Technology; Minister of State (Independent Charge) Earth Sciences; MoS PMO, Personnel, Public Grievances, Pensions, Atomic Energy and Space, Dr Jitendra Singh said, global challenges need to be fought through global collaboration, regardless of our respective ideologies ideologies or individual leanings.
Attending the Ministerial Plenary on the ‘Role of Foreign Policy in Enabling Space Diplomacy and International Cooperation’ along with the MoS Foreign Affairs of the UAE, Foreign Minister of Bahrain and Minister of Advanced Technologies of Israel, Dr Jitendra Singh said, Space Debate has brought all of us together to think about the wellbeing of the Earth.
Dr Jitendra Singh said, right from the beginning, India has envisaged for itself and pledged that our space and atomic energy programmes are dedicated to peaceful purposes and the same was said even when we started our Atomic programme soon after independece in the immediate backdrop of Atomic bombing of Hiroshima and Nagasaki bombings during 2nd world war, when the world hated anything which carried the name atomic with it. The Minister pointed out that
India’s founding scientists like Homi Bhabha had declared to the world about India’s peaceful nuclear pursuits and we have walked the talk and vindicated the same in the case of our Space programme as well.
Dr Jitendra Singh also told the august gathering that India distinguishes itself as it has successfully used Space technology for bringing in ease of living for the common citizens by working in different sectors like railways, smart cities, roads and buildings, highways, digital health, telemedicine.
Dr Jitendra Said, in the last 2-3 years, with the very path-breaking indulgence of Prime Minister Modi, a decision was taken to open it up to the non-government entities for private participation. And, within a span of 2-3 years, we have more than 100 start-ups and two of the start-ups have launched private satellites to grace the sky.
Calling for greater collaboration with UAE in the Space sector, Dr Jitendra Singh said, development of the Space sector is one of the priority areas for the leaders of both India and the UAE. He said, the indigenously developed Space sector of India and the fast growing Space sector of the UAE have a lot of complementaries that can be harnessed for greater good.
Earlier, Dr Jitendra Singh appreciated the thrust of the Abu Dhabi Space Debate for building the role of Governments in empowering space business and technology. He said, the list of discussions in ADSD on the role of the space sector to solve the climate issues, bringing accountability to environmental commitments, threats to and from space to the political discourse and making the presence of private sector and space innovation people driven that serve humankind; are very relevant to our time and are eye-opening topics, setting apart this initiative from any other such gathering in Space sector in the past.