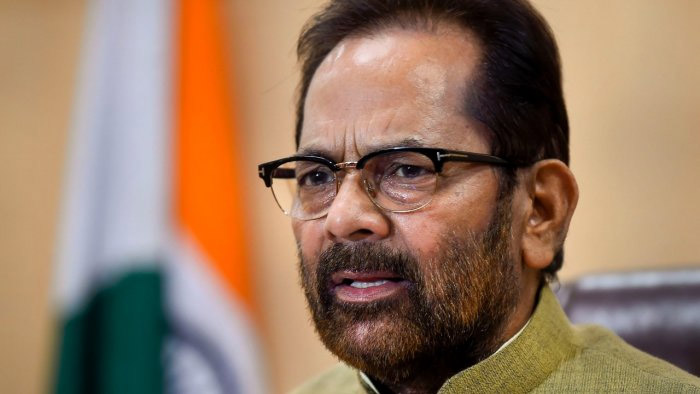 NEW DELHI, Feb 3: Union Minister of Minority Affairs Mukhtar Abbas Naqvi on Thursday slammed Congress and the governments led by the party before 2014, saying they have to get out of “Indira is India” belief to understand that there are no two Indias.
Speaking on behalf of the BJP during an ongoing discussion on the Motion of Thanks to the President’s address, Naqvi said, “We need to get out of the hangover of thinking of Indira is India and India is Indira and Congress is the country and the country is Congress”.
Congress leader Rahul Gandhi on Wednesday, criticizing the Presidential address that marked the beginning of the Budget Session of the Parliament, said the speech had no strategic vision and did not touch upon the main challenges that our country is facing currently including the growing gap between the extremely rich and the poor in the country.
Naqvi also informed the House that the PM Modi-led government has ended the rule of “cuts, commissions, family politics, Article 370 from Jammu and Kashmir, and brought Citizenship Amendment Act to protect religiously persecuted people”.
The BJP leader said there are two India; one is of the sanatani or thinking and the other of samanti or feudal.
Listing 28 changes by the PM Modi government, Naqvi spoke on how the situation has changed since 2014 and the ruling of cuts, commissions have been stopped completely.
In the Modi government, Naqvi said “the politics of the country is not being decided on the basis of the political circumambulation of the family, and that it is now based on hard work of eligible people.”
The Modi government ended the red beacon culture and the politics of power, Naqvi said, adding “We also destroyed political appeasement.”
After becoming Prime Minister, Narendra Modi made laws that were needed and removed those in which rules were not framed and these were lying for years without any use, he added.
The Minister said a total of 1,500 such unused laws were repealed.
Naqvi further said “week of riots” and “months of terrorist blasts” have come to an end, and “we replied to the neighbouring country by doing surgical strikes against its terrorist activities”.
Referring to late Prime Minister Rajiv Gandhi’s statement that money sent by the Central government from Delhi does not reach people in its original form, the Minister said that this scenario has now changed and people receive what is sent by the Central government.
Noting that there was a time when decisions of the Supreme Court were rendered ineffectual, Naqvi said, “The government took steps to make Supreme Court’s decision on Triple Talaq effective and brought forth a law to protect the rights of Muslim women.”
Naqvi also mentioned how the government abolished Article 370 from Jammu and Kashmir, saying that the law which cut off the erstwhile state from the country’s stream of development was removed.
By passing the Citizenship (Amendment) Act, 2019, Naqvi said, “Modi government provided citizenship rights to people persecuted on the basis of religion and allowed citizenship to six undocumented non-Muslim communities from Pakistan, Afghanistan and Bangladesh who entered India on or before December 31, 2014.”
The Minister also added that the CAA helped in bringing the minorities from Afghanistan after the Taliban took over the country.
The CAA was passed by Parliament on December 11, 2019 and the Act was notified within 24 hours on December 12. CAA exempts the members of the six communities from any criminal case under the Foreigners Act, 1946 and the Passport Act, 1920. (Agencies)