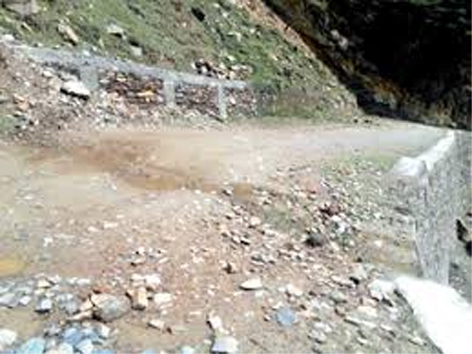 In an era of maximum connectivity, it is a thing to be believed that even after nearly two decades, link between Bhadarwah and Bhallesa (Gandoh) could not be established by the Roads and Buildings Department so far. While the people numbering more than 97000 continue to suffer, the reasons of such a state of affairs are attributed to shortage of funds, poor monitoring and above all, no interest shown in the important road project by the concerned authorities. Not only that, it is quite astonishing to observe that as many as 111 families are still waiting for getting compensation money for the land which they had to part with for this road and the matter is hanging in balance for as many as twelve years.
Why should the officialdom not specifically be identified that is suspected of “sitting ” on their files for so long a period and asked to explain as to why compensation money has not been paid to these villagers? The liability of land compensation running into crores of Rupees remains un-cleared and from every concerned quarter, the same alibi of “when files are cleared” is reportedly heard seems untenable. The question is why these files are not cleared and who clears them not? Non cooperation and lack of “proper understanding ” between R&B, Revenue, Forest, Finance and other concerned departments usually become the main reason of the type of mess, this road project in entirety is made to plunge into. Would the UT administration look into the entire issue with intent to resolve the same and ask for due accountability of the concerned officers responsible for entire mess, at an early date?