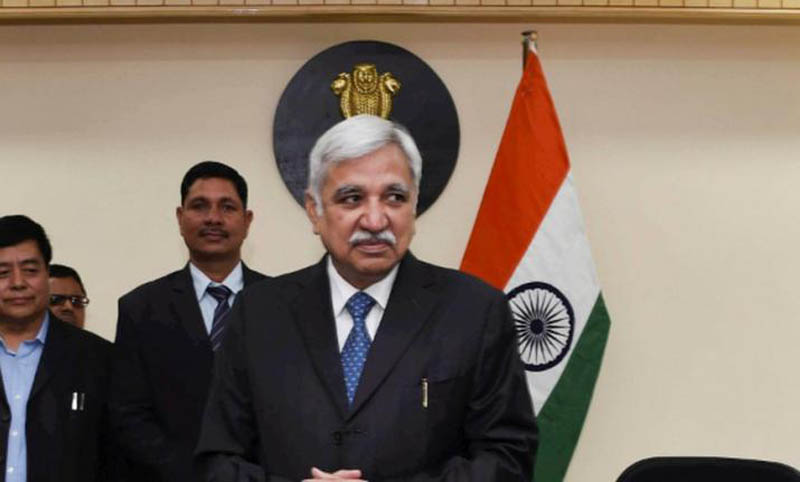 NEW DELHI, May 18: Against the backdrop of Commissioner Ashok Lavasa recusing himself from model code violation cases till his dissents are recorded on orders, Chief Election Commissioner Sunil Arora today said members of the panel are not supposed to be “clones” of each other and divergence of views was natural.
On a day Lavasa’s decision to recuse from Model Code of Conduct complaints became public, the EC said the ‘Full Commission’ would meet on May 21 to discuss the issue of dissent and “related matters”.
In an unprecedented move, Arora came out with a statement on the differences coming out in open, saying the episode was “unsavoury” and “avoidable”.
When contacted, Lavasa said the issue was an “internal matter” and he would like to offer no comment.
In his statement, Arora said that in the last meeting of the Commission on May 14, it was “unanimously” decided to form groups to deliberate the issues which arose in the course of conduct of Lok Sabha elections.
“Out of the 13 issues/areas which were identified, Model Code of Conduct is one of them,” he said.
“The three members of ECI are not expected to be template or clones of each other. There have been so many times in the past when there has been a vast diversion of views as it can and should be. But the same largely remained within the confines of ECI,” Arora said.
He said the differences have come out in the past when a former Commissioner or CEC has written a book mentioning details.
The law governing poll panel’s functioning states that preference should be for a unanimous view, but provide for a majority ruling in the absence of unanimity.
In a strongly-worded letter to Arora on May 4, Lavasa is learnt to have said that he is being forced to stay away from the meetings of the Full Commission since minority decisions are not being recorded.
He is learnt to have said that his participation in the meeting is “meaningless” as his dissent remained unrecorded.
He had said that his notes on the need for transparency have not been responded to so he has decided to stay away from model code related complaints.
He is learnt to have written to the CEC on three occasions.
The EC’s legal division had opined that dissent cannot be recorded on decisions as model code violations are not part of a quasi judicial hearing where all the three — the CEC and two fellow Commissioners sign.
The majority view is conveyed to the parties concerned. The dissent remains recorded in the file only and not made public.
Lavasa had dissented in some of the 11 decisions EC took on complaints against Prime Minister Narendra Modi and BJP chief Amit Shah for alleged model code violations.
The two were given a clean chit in all the decisions.
Arora lamented that the report on Lavasa’s decision not to take part in model code related issues came at a time when the poll watchdog is gearing up for the last phase of Lok Sabha polls and counting of votes.
Reacting to the development, the Congress demanded a probe into charges made by Lavasa.
The party alleged that eroding institutional integrity has been the hallmark of the Modi Government and asked whether the poll panel has become “Election Omission” and a “puppet” in the Prime Minister’s hands. (PTI)