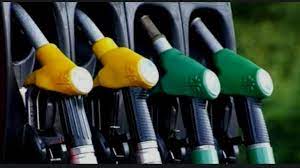 New Delhi, May 24: The prices of petrol and diesel remained unchanged on Tuesday.
According to a notification of the Indian Oil Corporation, petrol in Delhi costs Rs 96.72 per litre and diesel Rs 89.62 per litre.
In Mumbai, a litre of petrol is available at Rs 111.35 per litre while diesel is at Rs 97.28.
In Chennai, a litre of petrol costs Rs 102.63 while diesel Rs 94.24.
In Kolkata, the price of a litre of petrol is Rs 106.03 while diesel is Rs 92.76.
The prices of both petrol and diesel had fallen on last Sunday after remaining unchanged for 45 days in a row.
The fall was due to Union Finance Minister Nirmala Sitharaman’s announcement on Saturday to cut excise duty on petrol by Rs 8 per litre and Rs 6 per litre on diesel.
After Ms Sitharaman’s announcement to cut excise duty, Maharashtra, Rajasthan and Kerala too announced to reduce Value Added Tax (VAT) on petrol and diesel to provide further relief to the people in the respective states.
The fuel prices had been on freeze since November 4, 2021, but the daily revision resumed on March 22, 2022, after record 137 days gap.
There was increase of Rs 10 for petrol and diesel prices each through 14 revisions.
The last revision was made on April 6 by 80 paise a litre each and prices remained unchanged after that for straight 45 days. (UNI)