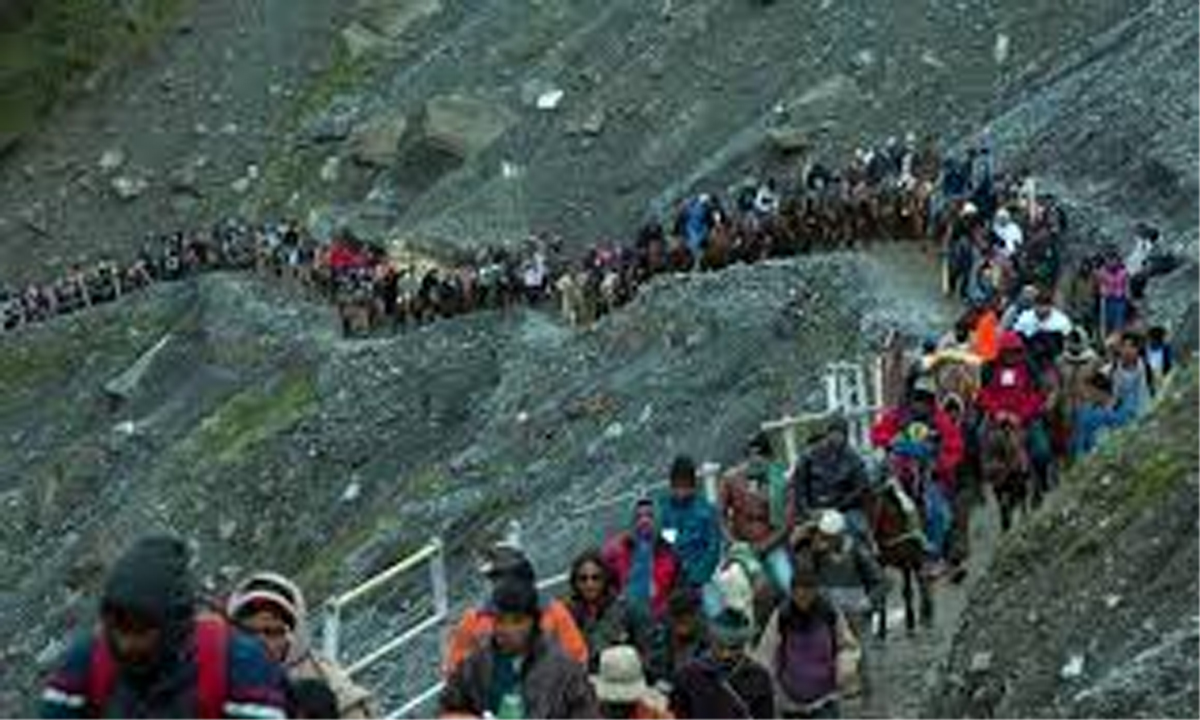 SRINAGAR, July 13:Fresh batches of pilgrims left Baltal and Nunwan Pahalgam base camps early Saturday morning to pay obeisance at holy Amarnath cave shrine in south Kashmir Himalayas, where so far 1.58 lakh yatris had darshan of the self-made Ice-Shivlingam since the commencement of the annual yatra from July 1.
The yatra was progressing smoothly from both traditional Pahalgam and shortest Baltal tracks though sky was cloudy, a yatra official told UNI.
Yatra was suspended from Baghwati Nagar, Jammu, as a precautionary measure on Saturday, when separatists had called for a general strike as on this day in 1931, 22 Kashmiris were killed in firing by police during Dogra rule. This is the second time yatra from Jammu was suspended since the commencement of the annual yatra from July 1. On July 8, yatra was suspended for security reasons in view of the strike called by separatists in the valley.
A fresh batch of pilgrims, including women, sadhus and sadhvis left Bagwati Nagar, Jammu, early this morning for Baltal base camp in central Kashmir district of Ganderbal and Nunwan Pahalgam in Anantnag.
Yatra official said 13004 yatris pay obeisance on Friday. With this, total of 1,57,062 yatris, including women and sadhus, from different parts of the country have paid obeisance at the holy cave since the commencement of the pilgrimage from July 1 till Friday night. Since early this morning over 1000 yatris, who had night halt at different halting stations, have darshan of the self made Ice-Shivlingam and more yatris are on way to holy cave.
He said fresh batch of pilgrims, including women, children and sadhus left Nunwan Pahalgam base camp for Chandanwari, the last motorable halting station on traditional yatra track. The pilgrims, who had night halt at different stations, including Chandanwari, left for next stations early this morning.
He said fresh batch of pilgrims also left Baltal base camp for the holy cave early this morning. The pilgrims, including women, children and sadhus will reach the holy cave after covering the distance on foot, he said.
Helicopter service is also operating normally from both sides. He said majority pilgrims, even those who are undertaking the pilgrimage via Pahalgam are returning through Baltal route.
(UNI)