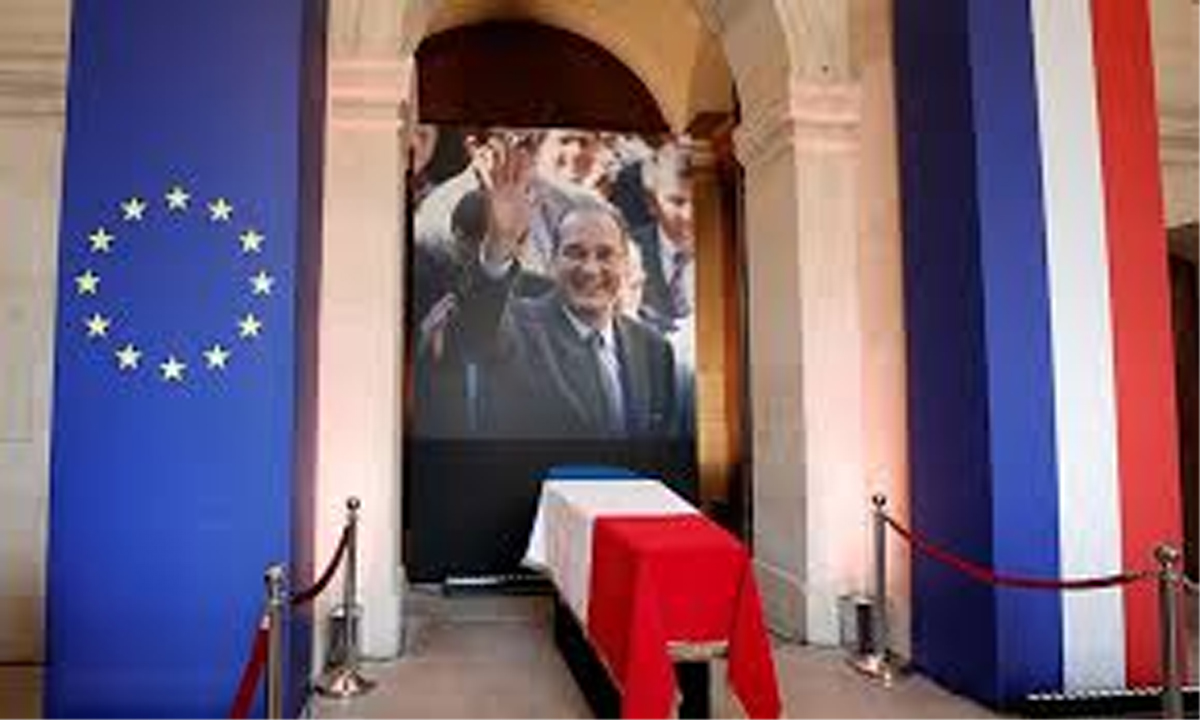 PARIS, Sept 30: Thousands of people on Sunday queued in Paris to bid a final farewell to France’s former president Jacques Chirac, fondly remembered as a charismatic giant of domestic and international politics despite a mixed legacy.

A massive queue snaked round the Invalides complex to pay homage at Chirac’s coffin ahead of a national day of mourning on Monday and a memorial service expected to be attended by dozens of world leaders.

Chirac’s death on Thursday aged 86 prompted a flood of tributes to a man whose high-profile political career spanned three decades capped by 12 years as president from 1995-2007.

But it also sparked questions about how much this consummate political operator had actually achieved during a long spell in office and again threw the spotlight on a 2011 conviction for graft over his time as Paris mayor.

Nevertheless, a poll in Le Journal du Dimanche newspaper showed that the French consider him to have been their best president of the modern era, alongside Charles de Gaulle.

An initial multi-faith prayer service was held around the coffin in the Saint-Louis-des-Invalides cathedral at the Invalides memorial complex with close family, including his daughter Claude.

His wife of six decades Bernadette, 86, was however unable to attend.

Members of the public were then allowed in to view the coffin, draped in a French flag and flanked by a picture of a waving Chirac.

Thousands lined up in a queue that wound around the Invalides complex, where Napoleon Bonaparte is buried, for almost a kilometre, braving the rainy weather and the prospect of a long wait.

“Adieu president, we miss you already,” read one placard in the crowd.

Admitted in small groups, some crossed themselves while others took photos and even selfies.

“Chirac represented a certain era,” said Marin Menzin, 21. “If he had seen the queue today, he would have jumped into the crowd to shake hands.” – The French presidency had since Thursday night thrown open the doors of the Elysee Palace for anyone wanting to write in condolence books. By the time the doors shut on Saturday evening, 5,000 people had done so.

The national day of mourning in France Monday will see a minute of silence observed in all public institutions and schools.

The coffin of Chirac will at 0900 GMT Monday leave the Invalides, under a military escort through the streets of Paris, before arriving at the Saint-Sulpice church for a final memorial service attended by President Emmanuel Macron.

The Elysee said some 30 heads of state and government are expected to be present, including Russian President Vladimir Putin, Hungarian Premier Viktor Orban and German President Frank-Walter Steinmeier. Former leaders who worked closely with Chirac, notably including German ex-chancellor Gerhard Schroeder, will also be there.

In a rare public appearance, the third president of France’s modern fifth republic Valery Giscard d’Estaing, 93, will also be present.

Absent will be French far-right leader Marine Le Pen, whose father Jean-Marie Le Pen — her predecessor as leader of what was then known as the Front National — once described Chirac as an “enemy”.

She pulled out after reservations expressed by the Chirac family.

In the final act, Chirac will be buried at the Montparnasse cemetery in southern Paris, next to his daughter Laurence who died in 2016 aged 58 following a battle with anorexia.

Perhaps Chirac’s most significant political decision on the international stage was opposing the US-led invasion of Iraq in 2003.

At home, he was the first French president to acknowledge France’s role in the deportation of Jews in World War II.

And he warned of the risk of climate change before it rose high on the political agenda.

But many tributes focused not on his policy achievements but the sheer charisma and genuine love for his country of a man who Macron said Thursday “embodied a certain idea of France”.

According to the Ifop survey in Le Journal du Dimanche, based on interviews with 1,015 people, 30 percent of French now see Chirac as their best president, the same rating as de Gaulle.

“It’s clear Chirac was no angel,” the paper wrote in an editorial, saying he had sometimes overstepped the mark for the sake of power.

“But to experience all these tests and embody the spirit of a nation, is this not the legacy of a great president? It is at least that of a great man,” it wrote. (Agencies)