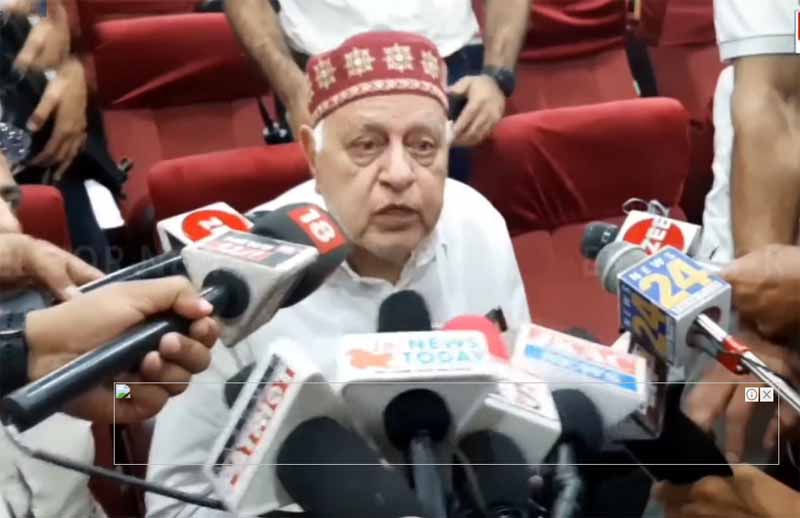 ‘Polls can be held whenever Govt wants’

SRINAGAR, July 4: The People’s Alliance for Gupkar Declaration (PAGD) today said that they will jointly contest the Assembly elections in Jammu and Kashmir.
The head of the PAGD and National Conference president, Dr Farooq Abdullah, today said here on the sidelines of a function that they will contest the elections jointly.
“We will contest the elections together. There is a political party that said that they have left the alliance. The truth is that they were never part of the alliance. They had come to break us from within,” he said.

Earlier in the day, People’s Democratic Party (PDP) president, Mehbooba Mufti expressed similar sentiments. “We intend to contest the elections together as it is the will of the people that we should strive together for the restoration of our lost dignity. We will fight for our rights and stand together against the sufferings and difficulties we are facing,” she said.
Responding to a question, Dr Abdullah said elections can be held whenever the Government wants. “Elections were held when we had floods. Why can’t elections be held now? The question is how they want to contest the polls,” he added.
Asked about the ongoing Amarnath yatra, Farooq said these are the people of Kashmir who have wholeheartedly ensured smooth conduct of the pilgrimage over the years.
“Who was the man who discovered the cave? He was a Muslim from Pahalgam. He went to Mattan to inform the Kashmiri Pandits. Muslims have never raised voice against any religion. There was always brotherhood. I accept that in 1990 a wave came that was not ours but it came from somewhere else. We are facing that brunt even today,” he said.
“This country will progress through love. It will progress when people will not forget diversity. This country is diverse culturally, linguistically and in every respect it is diverse,” he said.
“This country will be prosperous when we protect this diversity. I am telling everyone to have patience and God will pull us out of difficulties and that day will come, God willing,” he said.
“I see a good future for Jammu and Kashmir. God will pull us out of difficulties, if we follow a straight path. democracy will ultimately prevail. We have taken oath in the Constitution of this country and we will protect democracy,” he said.
“We want to live in peace, we want to come out of hatred, we want to live in brotherhood. Those who are against brotherhood, will fall,” he said.
When asked about Har Ghar Tiranga, Dr Abdullah said the Government of the time can hoist the national flag from every house. ”They have the final say. But it would be great when people fly the tricolour on their own and not due to diktats. It is great when tricolour flies in your hearts, then it makes sense,” he said.