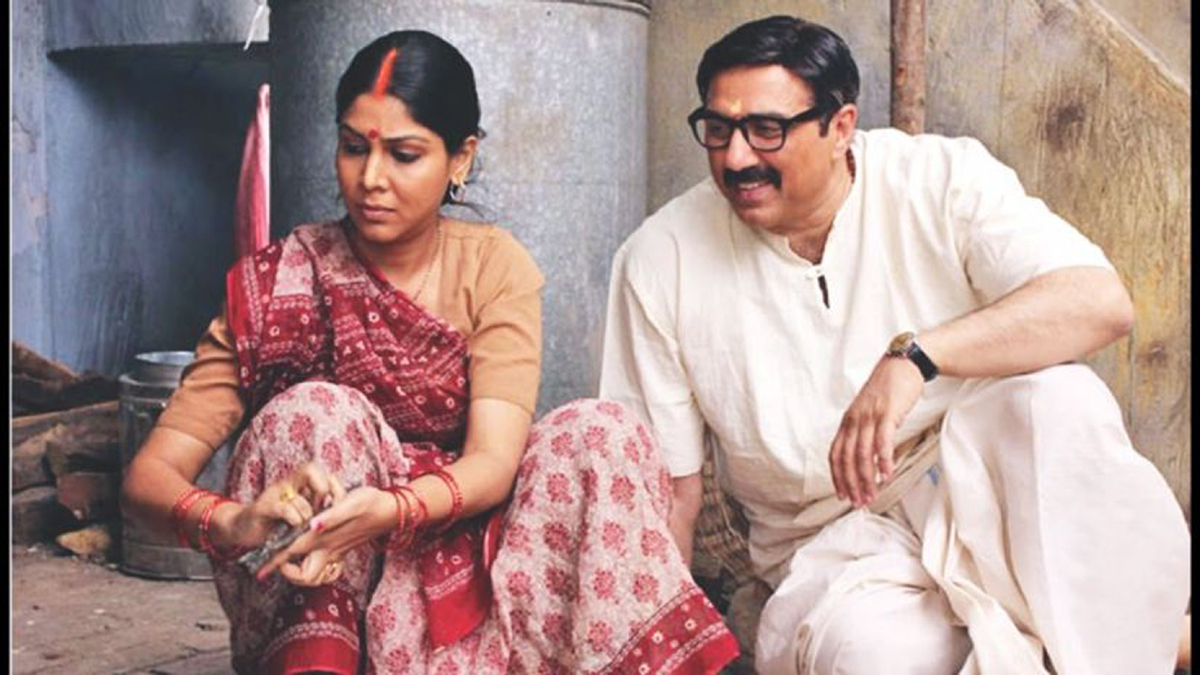 Globalization has brought the world closer. But a section of people, who are very rooted and swear by their age-old traditions and values, feel threatened by it. They always fear the Westerners are here to ruin their ancient tradition and that would mean a loss of identity. Dr Chandraprakash Dwivedi’s MOHALLA ASSI majorly talks about this aspect.
Based in Varanasi, which is also a hot bed for political discussions, this film also has a political and communal colour to it. The film was stuck at the Central Board of Film Certification for a few years and it was passed by the High Court recently. This controversy has got the film some traction. So does this controversy and content help MOHALLA ASSI in making a mark? Or does it turn out to be a disappointing fare? Let’s analyse.
MOHALLA ASSI is the story of a man with principles forced to make compromises. Dharmnath Pandey (Sunny Deol) is a priest who sits on Assi Ghat in the holy city of Varanasi. He attends to the pilgrims during the day and teaches Sanskrit in the afternoon. The income is meagre and unlike others, he doesn’t compel his visitors to pay him exorbitantly. This causes lot of distress to his wife Savitri (Sakshi Tanwar) and she’s forever cursing him for not earning enough. But Pandey feels that there’s no end to a man’s greed and that one should be happy with what he/she earns. He’s also a firm protector of the values of Assi and would not tolerate any ‘corruption’. A lot of other Pandas like him also reside in Assi which gives a clear view of river Ganga. As a result, foreign tourists insist on renting a room in this locality. But Pandey not only refuses to allot a room to any tourist in his house but doesn’t even allow others Brahmin Pandas do so. His neighbour and fellow panda Upadhyay ji (Saurabh Shukla) is hence always cross with him on this aspect. Besides Dharmnath Pandey, the film consists of subplots comprising of a tourist guide Kanni Guru (Ravi Kishan) who’s ready to do anything to earn more money and Nekram (Faisal Rashid), a barber who falls for a tourist, Kathryn (Alisha). Lastly, the film also focuses on a group of men, comprising of right-winger politician Radhe Shyam (Mukesh Tiwari), Tanni Guru (Akhilendra Mishra), Gaya Singh (Mithilesh Chaturvedi), lawyer Srivastava (Rajendra Gupta), communist sympathizer S P Mishra etc – who meet at Pappu’s tea shop and discuss about politics, religion and how foreigners are trying to pollute Varanasi.
MOHALLA ASSI is based on the book ‘Kashi Ka Assi’ by Kashinath Singh. The story is interesting and even quite brave as it boldly takes names of controversial incidents and episodes of modern Indian history. From a film point of view however, there’s too much happening and neither of the various tracks make the ultimate impact. Dr. Chandraprakash Dwivedi’s screenplay is engaging only in a few sequences but overall, it’s not put together properly. The tea-stall conversations seem interesting initially but later, it tests the patience of the viewers. Dr. Chandraprakash Dwivedi and Kashinath Singh’s dialogues are sharp and acidic at several places. A lot of abuses are used frequently but they are as per the requirements.
MOHALLA ASSI’s first hour is majorly devoted in just establishing the characters and the setting. Some sequences stand out like Gaya Singh forcing the cops to stop sealing the tea shop, Nekram and Kathryn eloping and Dharmnath Pandey deciding to go to Ayodhya for the cause of the construction of Ram Temple. The last-mentioned episode is expected to be a highpoint in the film but it quickly gets forgotten. It’s only in the second hour that Dharmnath Pandey takes centre stage and his problems get talked about. Few scenes here are moving and the sequence where Kanni Guru tells him to make major changes in his house is quite interesting. But after the much talked about dream sequence, the film goes downhill.
Sunny Deol is in a fine form. He’s known for his action roles and dialoguebaazi. The role doesn’t give him a scope to beat up baddies but he surely gets a chance to deliver angry monologues, but this time, it’s restrained. Sakshi Tanwar is superb as the angry young wife who is scared of her family’s future. One can feel her pain in several scenes. Ravi Kishan is very entertaining and will surely be liked. Saurabh Shukla is as always dependable. Mukesh Tiwari plays the right-winger to the T. Mithilesh Chaturvedi goes over the top. Rajendra Gupta also manages to leave a mark. Faisal Rashid is decent and his track will surely induce laughs. Seema Azmi (Ramdayi, Savitri’s neighbour) also provides comic relief. Daya Shankar Pandey (Behroopiya/character dressed as Lord Shiva) makes an impact in a cameo. The actor playing S P Mishra is okay. Out of the foreigners, Alisha gets the maximum scope followed by Sofia (Madeline). The actor playing Muslim vegetable vendor strikes a chord despite having a two-scene role.
On the whole, MOHALLA ASSI is a poor fare and fails to make an impact because of the unexciting script, incoherent direction and too many subplots and characters. At the box office, it arrives without noise and is sure to sink without a trace.
Courtesy: http://www.bollywoodhungama.com