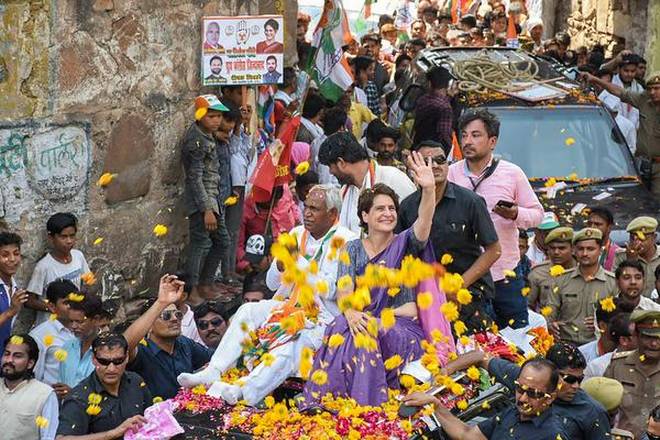 JHANSI (UP), Apr 25:
Seeking to woo voters ahead of the April 29 polling for the three out of four Lok Sabha seats in Bundelkhand of Uttar Pradesh, Congress leader Priyanka Gandhi Vadra Thursday held a roadshow here, the second in two days in the region.
On the second day of her Bundelkhand visit, she held the roadshow in a busy commercial area of the city, sitting atop a vehicle in a violet saree and exchanging pleasantries with people who lined up on both sides of the narrow and congested roads.
As young voters and Congress workers showered flowers on her cavalcade, she was greeted with slogans of “chowkidar chor hai” from the crowd at some places.
Priyanka got off her vehicle near a temple and offered prayers.
Jhansi is the largest town in Bundelkhand, a parched and underdeveloped hilly region spread over Uttar Pradesh and Madhya Pradesh.
Earlier on Wednesday, she held a roadshow in Mahoba of Banda constituency, which goes to polls on May 6 and an election meeting in Hamirpur, the voting for which will be held on April 29.
Bundelkhand has four Lok Sabha seats -Jalaun, Jhansi, Hamirpur and Banda.
Focusing on the Bundelkhand region, she had also addressed a public meeting in Hamirpur, accusing the NDA government of pursuing anti-people policies.
“The Modi government is ignoring the poor, farmers and women. It is bothered only about the power,” she had said.
“What have you done in the past five years, what has happened to the promises made five years ago?” she had asked the BJP, urging people to elect a government having a “feeling” for people.
“Elect a Government, a leader who is your hamdard(sympathiser),” she had said.
While the erstwhile Bahujan Samaj Party government under Mayawati had in 2011 proposed to create Bundelkhand state comprising seven districts of UP, outfits like the Bundelkhand Akikrit Party and the Bundelkhand Mukti Morcha wanted the inclusion of six districts of Madhya Pradesh as well.
During canvassing for the 2014 Lok Sabha elections, BJP leader Uma Bharti too had promised a separate state of Bundelkhand within three years of her party coming to power. A similar promise was made by the Congress during the last Lok Sabha elections.
All the four Lok Sabha seats were won by the BJP in 2014 with a massive 44.86 per cent vote share. In the 2017 Assembly elections, the Samajwadi Party (SP), the Bahujan Samaj Party (BSP) and the Congress were not able to dent the BJP’s support base here.
The BJP, in 2017, successfully carried on its momentum in Bundelkhand and bagged all 20 assembly seats in the region.
The BJP had dominated the region throughout the 1990s. Beginning with the 1991 Lok Sabha elections, the party won all four Lok Sabha seats in Bundelkhand.
It won all except Banda (BSP won this seat) in 1996 and again secured a landslide win in the 1998 elections. (PTI)