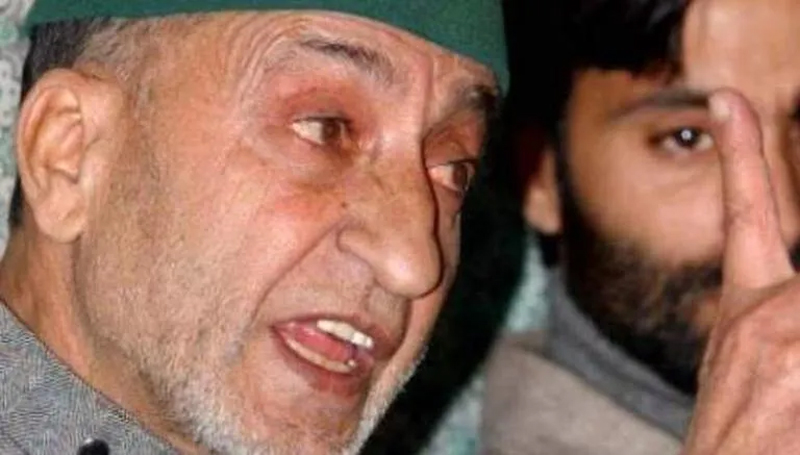 Excelsior Correspondent
JAMMU, Nov 26: Former Hurriyat Conference chairman Abdul Gani Bhat was today questioned by State Investigation Agency (SIA) for eight hours over terror funding from Pakistan, a police official said.
Bhat, who heads the Muslim Conference, was summoned by the SIA to its Joint Interrogation Centre in Jammu and grilled in connection with a terror funding case involving former Minister Jatinder Singh alias Babu Singh who was arrested earlier, he said.
The separatist leader, a resident of North Kashmir’s Botengoo village, was also questioned about terror funding from Pakistan, the official said.
Jatinder Singh, chairman of Nature Mankind Friendly Global Party, was arrested on April 9 after his associate Mohammad Shareef Shah was nabbed in Jammu with Rs 6.90 lakh hawala money.
SIA is investigating the case and has filed a charge sheet against Singh and two others on September 24.
“The questioning of Bhat continued till late evening. During the questioning, he revealed many facts regarding the money received by different separatist leaders in the Valley from across the border,” the official claimed.
Bhat taught Persian in a Government college before being dismissed on charges of constituting a threat to the State.
He studied Persian, Economics and Political Science at Sri Pratap College in Srinagar and then pursued his post-graduation in Persian and law at Aligarh Muslim University.