E-Paper
Home National Every religion has its own terrorist: Kamal Haasan 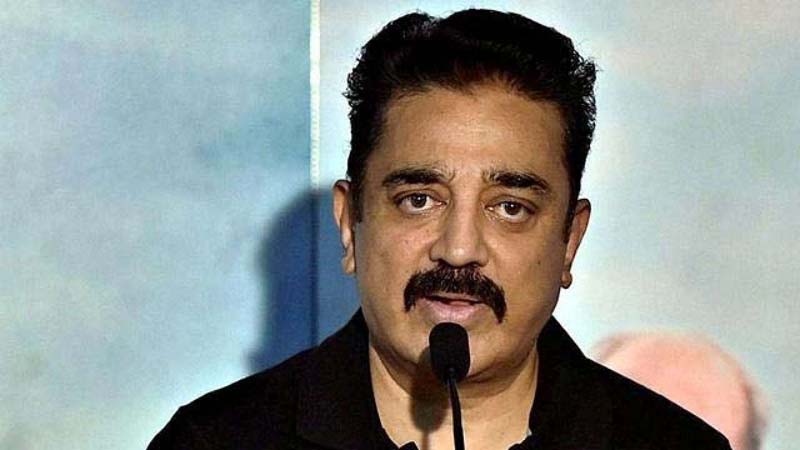 CHENNAI, May 17: Actor-politician Kamal Haasan, who is at the centre of a raging row over his Hindu extremist remarks, Friday said “every religion has its own terrorists” and that no one can claim to be sanctimonious.
The Makkal Needhi Maiam chief also said that he was not afraid of being arrested but warned any such action would escalate tensions.
Haasan said the remarks made during the Aravakurichi Assembly segment bypoll campaign meet on Sunday were not made for the first time, even as he asserted that “every religion has its own terrorist” and “this shows that all religions have their extremists.”
The actor-politician, who had filed an anticipatory bail plea after an FIR was registered in Aravakurichi in Karur district for his remarks, said he had made similar comments in Chennai during the Lok Sabha election campaign but it was being taken note of now by those people “whose confidence is dipping.”
“Let me tell you, terrorists abound in all religions. Around history, you can list many people from many religions. So I was talking in that (sense). Every religion has its own terrorists and we cannot claim that we are sanctimonious and we have not done that. History shows you that all religions have their extremists,” he told reporters here, adding his focus in Sunday’s campaign speech was on maintaining harmony.
Haasan was asked if he could have avoided mentioning Godse’s Hindu religion.
The actor-politician said he stood firm on his remarks made on Sunday.
He claimed there were no tensions after he made the remarks, and alleged “tensions were created”, apparently by his detractors.
Asked if he had filed the anticipatory bail plea in the Madras High Court fearing arrest, Haasan replied in the negative.
“I don’t fear arrest but I have got campaigning to do.
Let them arrest, but if they arrest me tensions will escalate.
This is not my request but an advice. Better not to do that,” he said. He also alleged that the media selectively edited his speech that day.
Asked if he felt ‘intimidated’ by state Minister Rajendra Bhalaji saying the actor’s tongue should be cut off for his remarks or incidents like stone-pelting in his public meetings, Haasan said he didn’t even feel threatened.
“No, I am not even threatened. I feel that the quality of the polity is going down. I will not indulge in this mudslinging back and forth,” he said.
When a scribe asked if he would apologise to Hindus without any party leanings for his remarks, he said one should differentiate between Hindus and the RSS.
“We should differentiate who are Hindus, who is RSS.
You can’t generalise. Political functionaries will get hurt any time, non-political persons with a faith will only wonder for sometime why he has spoken like this…things like getting hurt, getting angry and attacking are political tools. They are violent tools,” he said.
Even in the past, various groups had protested against him, “but people later realised they were not proper,” he said without referring to any particular incident.
Incidentally, Haasan had faced the ire of Muslim groups who wanted his 2013 flick ‘Vishwaroopam’ banned, after they took umbrage to the depiction of the community in the film and had staged vociferous protests.
His Dasavatharam (2008) too faced release-time issues when a Vaishnavite organisation had moved the court against the very title of the film, which means the Ten Incarnations of Lord Vishnu, besides objecting to certain scenes.
On Prime Minister Narendra Modi’s reported statement that a Hindu cannot be a terrorist, Haasan said, “History and history teachers are there to respond to him.”
“Many think he is very knowledgeable. Therefore history and history professors are there to respond to him,” the MNM chief said.
The actor further said he will always reach out to all faiths.
With regard to police denying permission for him to undertake campaigning in Sulur Assembly constituency in Coimbatore on Friday, the MNM chief asked if there was problem then why can’t the bypoll be postponed.
“If government or police feel the situation is not conducive, fear law and order (problem), they should probably postpone Sulur bypoll,” he added. (PTI)